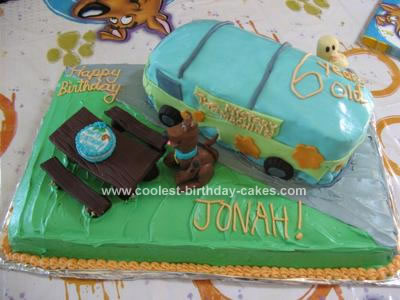 My son wanted a Scooby Doo Mystery Machine Cake for his 6th birthday. However, he also wanted Scooby and a ghost in the cake so I had to figure out a fun way to incorporate those into the cake.

I used a plain sheet cake as the base layer and frosted it to look like grass and a parking spot. The Mystery Machine was a pound cake covered in homemade marshmallow fondant. The tires were formed out of molding chocolate. I also used the molding chocolate to create the picnic table and Scooby. I actually used frosted Mini Wheats skewered with toothpicks to create a base to mold Scooby’s body around. His collar, tongue and eyes were made out of fondant.

Since Scooby was helping celebrate my son’s birthday I made a tiny birthday cake out of fondant to place on the picnic table. The ghost was created with moldable white chocolate. I wanted it to look like a person just dressed up as a ghost (like in the cartoons) so I made sure to show a shoe sticking out under the white sheet as well as a finger at his mouth making the “shhh” signal as he snuck around the back of the van.

My son and his friends loved this homemade Scooby Doo birthday cake. It was a little tricky to make but I was very pleased with the final product!