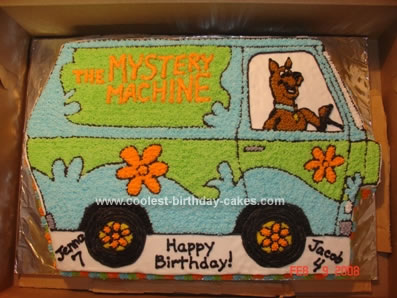 My kids have the same birthday and they both were obsessed with Scooby Doo. Happy that they chose a “joint theme” for once, I decided to make one large Scooby Doo Mystery Machine cake for them together.

I frosted the whole cake white, then drew the outline in black (#3 tip). I filled in the outline with #16 stars, and used the same tip to make the tires. I added Scooby Doo in the driver’s seat, wrote “The Mystery Machine” on the side of the van, and trimmed the bottom with stars of alternating colors. I used the white area at the bottom to write “Happy Birthday” and their names.