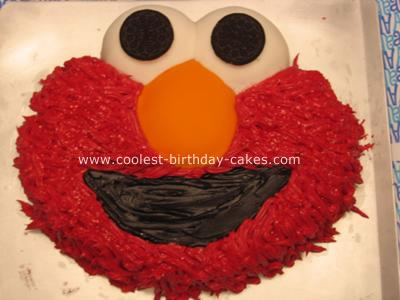 This was the cake for my daughter’s 2nd birthday party. She was very into Elmo and I was nervous about making the Elmo cake because I am not great at using character pans and getting the red color of his fur right.

To get the red color so red, mix up the icing with gel coloring at least a day in advance. The color will deepen as it sits in the refrigerator. I made the cake the day before and he even continued to get redder after he was all iced.

I used the Wilton Elmo pan with LOTS of Baker’s Joy spray and he popped right out with no problem. I first did a crumb coat of red all over his face. Then I used fondant to cover his nose and the whites of his eyes. I also filled in his mouth before putting on his fur. His mouth was fudge icing. Doing this first allowed for me to cover any off edges with his fur. I used a star tip to make the fur. At first I was worried that it would not look furry enough but the more I put on the better it looked. And since the crumb coat was red, the overlapping of the fur pieces really made it look furry. I used Oreo cookies for the blacks of the eyes.

To finish him off I sprinkled him with red sugar sparkles! I got this idea from some people on this website. What a great way to share great cake ideas. These cupcakes were the perfect compliment to the Elmo cake my daughter requested. I wanted to make sure I had enough cake for everyone and Elmo was not enough.

I baked the cupcakes and iced the tops with blue icing. To get the deep blue make the icing up at least a day in advance. I used gel food coloring. The color will deepen as it sitting in the refrigerator. Then I applied his “fur” with a star tip.

His eyes are white modeling chocolate rolled into balls with mini chocolate chips pushed into them (tip side first). You can also use fondant rolled (but they will get really hard and not so great to eat) or mini marshmallows. Then I cut chocolate chip cookies in half and pushed them into the icing. I finished them off by sprinkling them with blue sugar sparkles. They were a big hit!