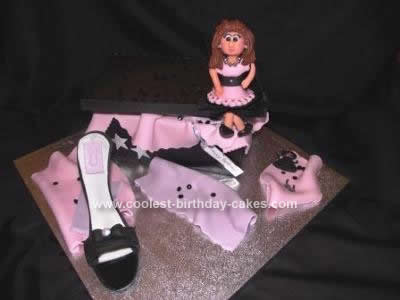 This is my first attempt at making a shoe box cake (with shoe) which was for my niece’s 18th Birthday. I wanted to make something different for her so committed myself by saying I’d do it then having a bit of a panic! However, one step at a time and it all paid off along with many lessons learned along the way. So where to start.

Well, I used a loaf tin to make a traditional fruit cake which also allowed me more time to work on the cake, a sponge would have put me under too much pressure to complete it in a short space of time. I covered the cake in marzipan and a layer of white icing. The four sides of the box are made individually from sugar paste mixed with modelling paste and rolled out thinly and left to dry, the same principal goes for the lid except that on advice from my local cake supplier I used a thin sheet of cardboard and put sugar paste over it for extra strength then added the sides of the lid to that.

The shoe itself was made by taking apart my own shoe to use as a template! I used the base to make a template for the sole and the white inside label and attached the top with cling film to prop it up and set it to dry for 2 weeks, meanwhile, I made the heel. This part I found excruciatingly fiddly as I simply struggled to get it perfectly straight (more practice needed there) and next time I’d use a different technique I think. However the heel started life as a “sausage” wider at one end than the other and once shaped I pushed a cocktail stick thru it and left a piece sticking out of the bottom in order to place it on the board later. Again 2 weeks to dry.

The most pleasant part of this Homemade Shoe Birthday Cake Design creation has to be the little lady, I love her. I started with the head and neck, made the hair using a play dough toy and made the dress out of one large piece of sugar paste that was shaped into the dress that you see, a point to note here is that I failed to hollow out a space to fix the legs onto and when I came to sit her down she was at the complete wrong angle for her legs. Next time I’d hollow out the dress and attach the legs at the same time rather than separately. So to cover my error I had to make an underskirt out of voile but I think it looks OK. Her jewelry is simply made from silver cake decs. The tissue under the box lid and on the board is simply rolled out sugarpaste trimmed with pinking shears and the little earnings and bag are the same with edible beads.

In all apart from the cocktail stick and cardboard hidden under the lid, the whole cake is edible. My “mad” moment came when my sister in law wanted to cut it and I yelled “no …. you can’t” much to the astonishment of the “party”, too attached I guess !!

Thanks for looking at the Homemade Shoe Birthday Cake Design and any tips and comments greatly received. 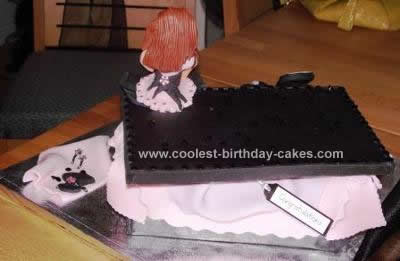 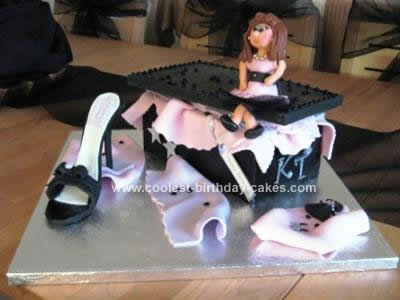 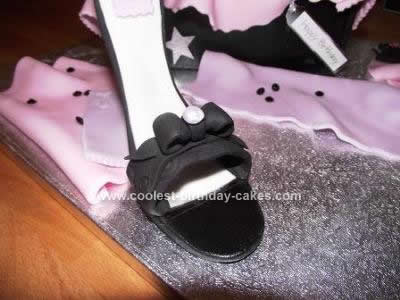