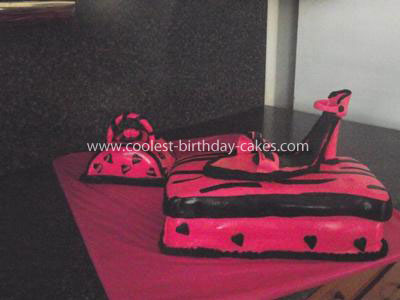 I made this Shoe and Purse Birthday Cake for my sister to give to a friend of hers. We wanted it to be adult but girly. This would also be a nice cake for a teenager.

The shoe was made out of gumpaste. I took an old shoe of mine and made a template for the sole of the shoe. Then after cutting it out of gumpaste I sat the heel end of it onto a glass measuring cup placed on its side to let it dry some the strap of the shoe was then cut out and attached with sugar water to the sole to keep that up I just used some wadded up plastic wrap under it until it was dry enough to stay on its own. The heel was a dowel covered in gumpaste with a small amount left out on one end that I pushed down flat to fit against the sole of the shoe it was then attached with sugar water after that I added the lining of the shoe and made a bow that was placed on top of the strap.

The same with the strap on the heel, I originally didn’t add it but wanted to add something more to the shoe and that is what I came up with. It is just a small strip of gumpaste attached to the back of the shoe then another small strip added to the front of that again plastic wrap was used to hold until dry.

The shoebox was sheet cake cut in half and stacked and the purse was a 6inch round cut in half and placed on its side to resemble a purse. Both were covered in pink fondant and for the shoebox I applied the fondant by paneling it on the lower 3/4 of the cake then applied the pink with the zebra print onto the top portion of the cake to create the look of box and lid. I added the decorations and for the purse strap I used floral wire covered in fondant then stuck it down in the cake.