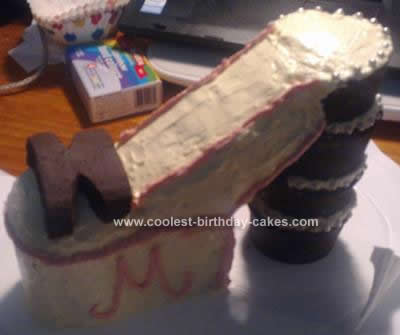 To make this Homemade High Heel Shoe Cake I used a mud cake recipe, but reduced the water slightly (example, the recipe asked for 1 of water+0.5 of coffee, and I’d suggest you use no more than just under 1 cup of liquid in total). The reason is that if the cake is too muddy in the middle, it will be ‘unstable’ when you build the pieces together – (which did happen to me, but it was fixable, luckily).

The cake was baked in a rectangular silicon tin and silicon cupcake tin. A pattern was made for the toe->middle part of foot section of the cake out of paper, and using a sharp knife, the rectangle was cut in half, shaved at the sides and front to fit. The cut outs were then added to the basic rectangle + heel of cupcakes.

The cake was then built on top of a plastic plate that had been cut and paper handles attached to the plate, so that the cake could easily be turned around whilst decorating/ relocating the cake into a box for transport.

Skewers we utilized to attach the pieces together – however the cake was slightly too muddy and I had an almost mudslide at the rectangle section close to the cupcakes, which was made from the middle of the cake (muddiest section). To remedy this, I utilized peanut butter as cement, and a thin slice of the cake that was less muddy (the edge of the cake) was stuck onto the side that was sliding. In hindsight I might have rethought the locations of the skewers or cut the pieces of the cake differently. Perhaps alongside skewers I could have used peanut butter to stabilize the cake further between pieces, as I also had to carry the cake quite a distance.

The cake did survive, with a minor crack between where the heel joined the ascending middle of shoe (easily fixed with some repositioning of the heel).

Butter cream icing was slathered onto the cake and piped using a plastic sandwich bag with a hole in it. Silver balls were bought and placed on the edges of the heel.

Pink icing was created by adding pink food dye to the butter cream icing and using another plastic sandwich bag with a hole, was piped onto the shoe. The M was written on the shoe as its the first letter of the person for whom the cake was made.

The X at the front of the shoe was created from cutting the extra chocolate cake into shape. The X is not flat: its curved underside, so its more like a “real” shoe. I used a piece of the cake that was not from the middle muddy section, but closer to the edge (but not the actual edge of the cake which has a different, more crumbly texture).

I did not refrigerate the cake at all(average room temperature ~15-20 degrees Celsius), although refrigeration may have helped to ‘set’ it further. 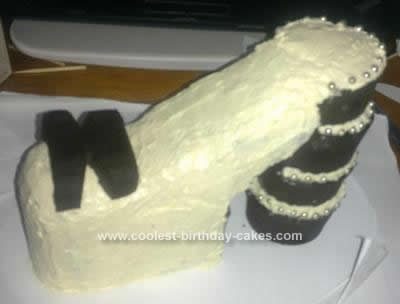 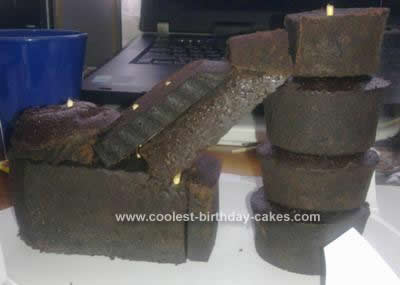