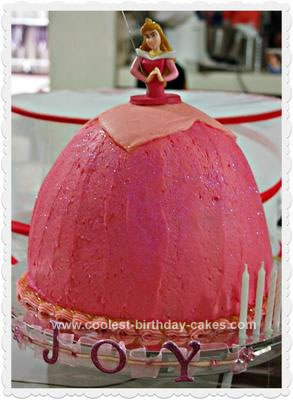 My daughter just turned 8 last August and she requested a Disney princess cake for her birthday so I decided to make her favorite among the Disney princesses….Sleeping Beauty! I ordered the Sleeping Beauty cake topper online because I can’t find one here in Perth (make sure you have at least 3 weeks time when ordering online for the cake decorating supplies you need to be sure it reaches your place before the event.)

The cake was quite big and heavy because it was a 4 layered chocolate cake with chocolate ganache filling and frosting then butter cream for the icing. The sparkle glitter made the gown really nice so don’t forget to get one of the same color as the icing you want to use. I had to bake the cake a day before and freeze it to give me enough time with the decorating.

My daughter was so surprised with her cake because she never had even a hint that I was making her one. I was able to keep it from her by turning on our second fridge just for that cake. All her classmates were so amazed when they saw the cake. I even remembered one of her classmate saying, that is WICKED! And of course the best compliment ever is that very big hug I got from my daughter as she thanked me for her cake.

I also decorated the cake stand with my daughter’s name which I think also added to the elegance instead of writing her name on Aurora’s gown. I just had to use a glue gun to attach the letters, lace and some pink diamantes used for arts and crafts. It was my first time to make a cake using butter creme frosting and I’m looking forward for my next project in 2 weeks time because it’s my other daughter’s birthday coming soon and she wants a fairy princess cake.