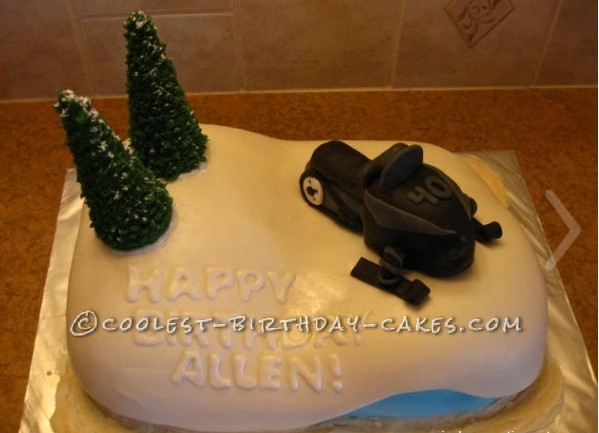 I do not have a cake business, but I had my very first order for a custom cake where I actually made some money! A lady came to me and asked me to make a cake for her husband for his surprise 40th birthday party. She told me that he loves snowmobiles, hunting and fishing. I looked around and finally decided to make a snowmobile cake. I wanted it to look like it was in the snow capped mountains with some trees.

I started out by making the snowmobile itself. As I wasn’t sure what a snowmobile actually looked like, I went online and found photos of different snowmobiles from every angle that I could find. For the base I started out with rice krispies. I hand formed the general shape and then carved out the details with a sharp knife. I covered the front half of the snowmobile and the seat in black fondant and the back half in grey fondant. I formed the windshield and handlebars from grey fondant as well.

For the wheels, I rolled out a small ball of white fondant and flattened it. Using a knife, I gently cut out the spokes. This was quite difficult and took a lot of precision. I then rolled a long strip of black fondant for the tread and flattened it. I wrapped it around the 2 small black wheels and the white wheel and then added grooves. I rolled a thicker roll of black fondant and wrapped a thinner roll of grey fondant around it for the suspension and cut out the skis. I added a 40 and some blazes to the front and the snowmobile part was done.

Now for the cake. I baked 2- 9 by 13 cakes. I placed the first one on the cake board, then cut out the hills out of the second cake  (I always find it easier to carve cake when it is mostly frozen). After icing, I strategically placed the hills on top. I then rolled out some blue fondant and covered the whole thing. For the snow capped part, I simply rolled out a piece of white fondant and rolled the edges. I placed this on top. For the trees, I just put green icing onto a pointed ice cream cone using the Wilton icing tip #233 and decorated with icing sugar. I placed the trees on one hill and the snowmobile on the other and added Happy Birthday Allen! They were very impressed! 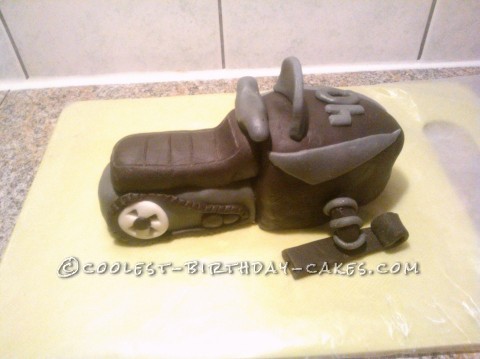