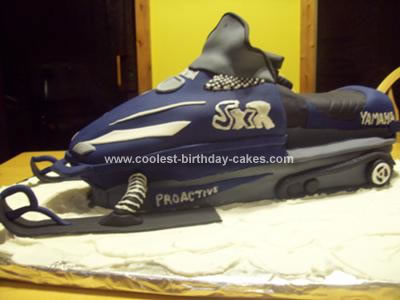 This 3D Ski Doo Snowmobile Cake is carved and decorated to a Yamaha model, took a lot of time and patience, but the hard work paid off. It took 6, 9 by 13 pans of cake, which are tiered and “glued” together by buttercream icing. I drew sketches on paper, which I then cut out and used as a template when carving the cake. Then I “dirty” iced the carving with buttercream, and a layer of fondant. Then I measured and cut the colored pieces of fondant and “glued” to the first layer of fondant by “painting” on water to the pieces.

Anything that needed to be raised, like the windshield and the skis I stuffed with cotton balls until the fondant hardened. The smaller details were piped on with buttercream icing. Then I placed the skidoo on a larger board, attached the skis and added a lot of buttercream all around for the “snow”.

I only wish I would have used some support system to have the skis attached to the bars properly and the track smaller under the seat. Next time.