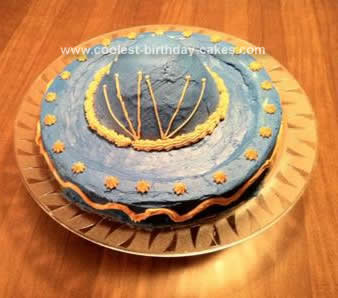 This Sombrero Cake was made for a friend who was serving it at a Mexican dinner for family on Memorial Day weekend. She requested a sombrero hat. I struggled with how to make it and ended up making a 14″ round cake for the bottom level. The other part was made from the Wilton Wonder cake pan. This is the cake pan that is used to make the Barbie cakes. The cone shape was just perfect. The cake was all strawberry.

To get the hat to look like it was kind of rolled in, I carved out part of the bottom level, creating a two inch ledge that went around the rim of the hat. Because I had just cut out a bunch of cake, there were a lot of crumbs so I first “dirty iced” it with white fondant to catch those crumbs. I then covered it all again with a heavier layer of blue buttercream frosting (I wish I could have gotten it smoother). I made some gold-tone buttercream icing and decorated using the star tip, the shell tip and the small writing tip. I used my son’s sombrero we bought him in Cancun as a reference.

I’m much better at fondant but the end result looked like a sombrero and my friend loved it. It was also a large and heavy cake that could serve about 45 people.