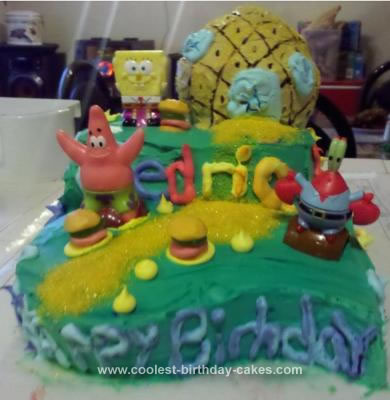 This was my first time making a themed cake, it was for my little brother that loves Sponge Bob, he was turning 10. He said his friend’s mother brought in a cake with Sponge Bob’s face and he wanted one like it for his birthday. I wanted to make him a character cake instead of Sponge Bob’s face. So after drawing my ideas, in the end I came up with this SpongeBob Themed Cake.

The pineapple house is made by 2 large chocolate cupcakes, the bottom is upright and the top part is upside down. The top on both cupcakes was cut so they can be even and create one shape. Luckily I had accidentally made more yellow frosting (whipping cream with food coloring)than needed and I was able to put the rest on top of the upside down cupcake making it look like a pineapple but its just frosting. The 2 cupcakes are attached with butter cream frosting.

The second layer is red velvet and in between is butter cream frosting. The last layer is chocolate and vanilla bread and in the middle strawberry’s and strawberry glaze.

I wanted it to look like it was under water so I cut the edge of one side wavy to give it the water feeling. Then the top layer was cut the same but opposite. Where the bottom layer is in the top layer is out, I thought that would make it seem like it was water.

The frosting all over the cake is whipped cream, made with 1 whipping cream carton mixed with butter and sugar and food coloring (blue, green, yellow, brown for the pineapple lines, red and purple). I tried making the color of the cake ocean like so I kept mixing blue and green until I got the color right. The sides of the cake have the weird looking flower things that come up on the show as a background. The sand is yellow sugar candy that looks like a walk way to Sponge Bobs house. The character are toys, and the crabby patties are the hamburger candy.

The look on my brother’s face was priceless when he saw the finished product after school. He apologized because the day before when he saw the layers of bread sitting on the table he wanted to throw it away because it looked nothing like Sponge Bobs face. In the end he thought this was better than the face.