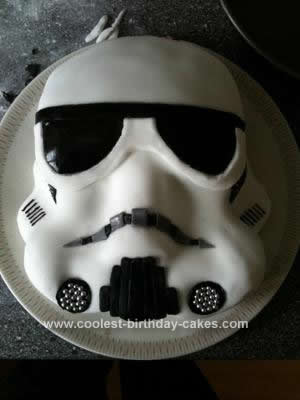 I made this Homemade Storm Trooper Birthday Cake after seeing the fantastic ones on this website. My boyfriend is obsessed with all things Star Wars (he’s 29, haha) and definitely all things Storm Trooper so it was an easy decision!

I firstly made one cake in a 9″ round pan, and then another one. I should have bought two pans, haha. D’oh! I left them overnight wrapped up well, so that they’d be easy to level and decorate the next day. They were absolutely fine and still moist. With the big dome leveled off, I had absolutely tons left over to make the 3D facial shapes, with loads left to spare – really glad I didn’t make another cake! I drew the shape of the face on paper and cut out it out from one cake and frosted it, and then I cut the 2nd cake from a slightly different stencil, so that it would give the height and 3D effect that I needed. I then frosted that. Then I placed the cut outs along the nose and eyes and chin bits, and frosted.

The fondant bit nearly killed me, I was so stressed that I’d rip it having never used it before but it was great, covered every inch of my chocolate cake so that it was perfectly white. I bought the ready to roll stuff, easy peasy. I also bought ready to roll black fondant, and some tubes of black writing icing (all from Tesco). I decorated the cake purely using that, and rolled some white and black fondant together to get the grey bits. I also bought some edible silver balls to put as the microphone bit – it looked really cool!!

I wish I’d made the eyes a bit narrower, he looks less evil and more like a storm trooper with sunglasses on, but ho hum, I was still chuffed with it and my boyfriend was absolutely thrilled!! Made it all worthwhile. 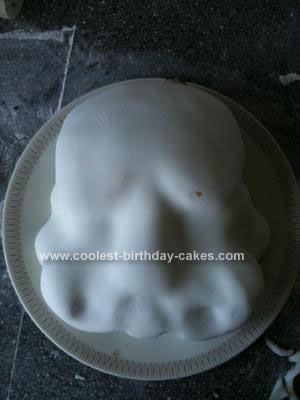 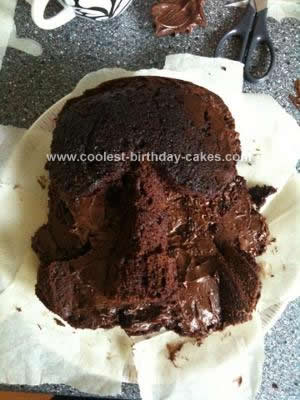 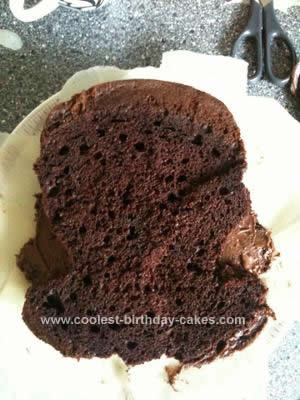