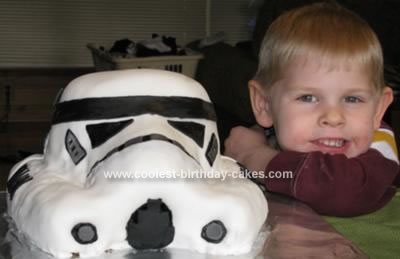 My 5 year old insisted on a Star Wars Storm trooper cake so I searched the internet and only found two examples that I liked. It looks more difficult to do than it actually was to make.

I trimmed the top off of the pitcher shaped cake to flatten it out and used some small rectangular cut up pieces to raise the front nose-like part of the helmet. I used butter cream icing to hold it all together. After that iced the entire cake and laid white fondant over it. I’ve never used fondant so wasn’t sure how to trim or put the seams together without being seen.

I used examples from the internet and my son’s storm trooper doll to decorate the helmet. I used black and grey fondant to decorate.