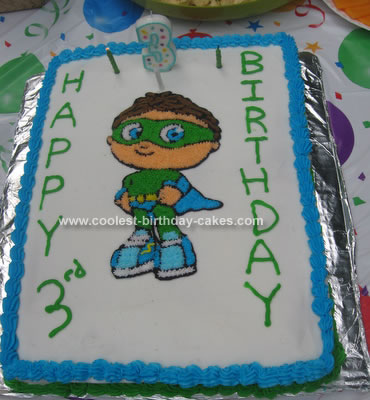 I made this Super Why cake for my daughter’s 3rd birthday.

I baked an 11×15 cake- half yellow and half Devils food using one box for each half. The night before I made the cake I made up all my frosting and mixed my colors as I know from the past that this is what always takes the longest. I made 2 double batches of frosting using the basic Wilton recipe. I did end up with a bunch leftover- I probably could have gotten away with one double and one single batch but I’d prefer to have extra than run out while decorating.

I baked the cake early Friday morning before work and leveled it using a method I’d found online a few years ago…after it comes out of the over while its cooling in the pan press down gently with a clean dishtowel to level the cake out- be careful of escaping steam. Then cover with several other dish towel while it finished cooling. I have found that this works fantastically to levels out the cake well (not perfect but close enough) and then I don’t have to cut it to level it off so it reduced the crumb factor in my frosting and it traps in a lot of moisture in the cake.

I frosted the cake late afternoon and saved the decorating for after the kids went to bed. To do the image I traced it with piping gel using a #1 tip then put it on the cake- the first attempt did not go well so I gently & carefully smoothed the cake back out and did it again- it worked much better the second time- I used more piping gel and made sure I really traced the lines w/my brush & fingers. Then I did the outline with black frosting and a #3 tip. I filled in all the color w/a #16 star tip. For the hair & writing I used a #5 tip. Borders were done w/a #21 star tip.

I was really happy with the end result and most importantly my daughter loved it!