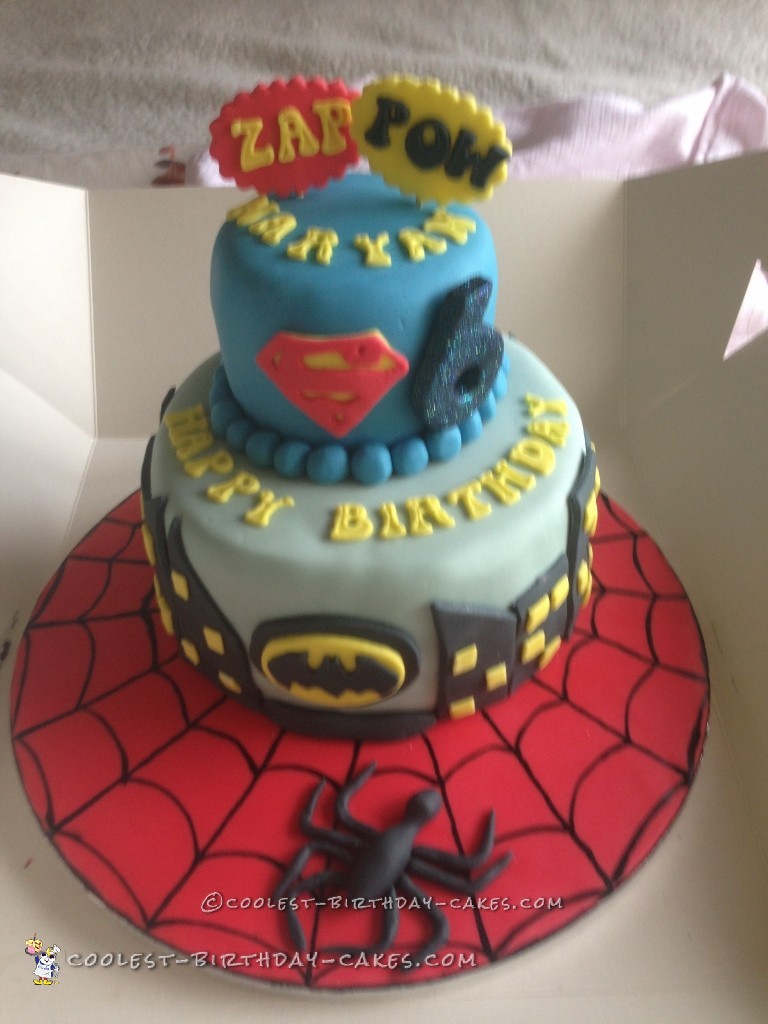 A friend of mine asked me if I could do a super hero cake for a friend of hers son who was to become 6 years old, well I love a challenge so I agreed to do it, she decided to leave the cake to me so I decided to do Superman, Spiderman and Batman. It was to be a two tier cake.

I baked an 8” and a 5” cake in vanilla sponge this was left to go cold meanwhile I coloured some fondant icing in red and covered the cake board and set aside to harden overnight.

I now coloured some icing in light blue and some in ice blue ready to cover the cakes.

I now coloured some fondant in black and cut out shapes of buildings and stuck them to the sides of the larger cake using a little water leaving room for the batman logo, I then coloured some fondant in yellow for the windows, I cut out little squares for the windows and I stuck these on using a little water. now I made the batman logo and attached this to the cake, I now made the superman logo and stuck this to the front of the top cake, with some black fondant I cut out the number 6 and when dry I wet slightly and covered in edible glitter and stuck to the front of the top cake. I rolled out little balls in ice blue and attached around the base of the top cake, I cut out two plaques one in yellow and the other in red and attached these to sticks I attached the wording ZAP and POW onto them.

I then cut out the wording in yellow and stuck this to the cake.

I now mixed some royal icing in black and pipe iced the web onto the cake and then I made a spider out of some black fondant and attached this to the cake board, the cake was now finished they loved the cake and I was really pleased with the end result.