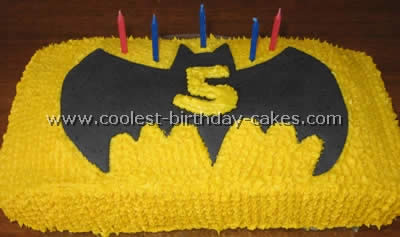 Making this birthday cake was so much fun and quite easy. I got the idea from this website and from another Batman picture. All I did was buy a chocolate sponge and then I used some instant mix modeling paste (pastillage) that I brought from a cake store. I mixed in some black food coloring and rolled it out flat. I got a batman template that I got from the computer and cut around it.

Before I put the next step on I made simple sugar syrup to help the icing stick to the cake. I mixed up some more of the modeling icing and put some yellow food colorings in this time rolled it out big enough to cover the cake and then trimmed it all up. The best part of the cake was piping all the little yellow stars on. Was great fun and my son thought it was real cool. 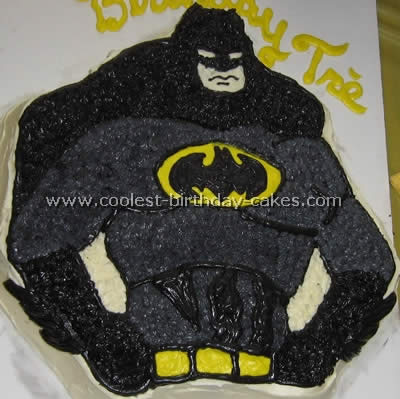 The pan is actually a superman one. I looked at a batman picture and using a star tip I piped in the icing black. Icing is very hard to make, you just have to keep playing with it until you like the color. It turns out best when you use Wilton’s coloring (black). 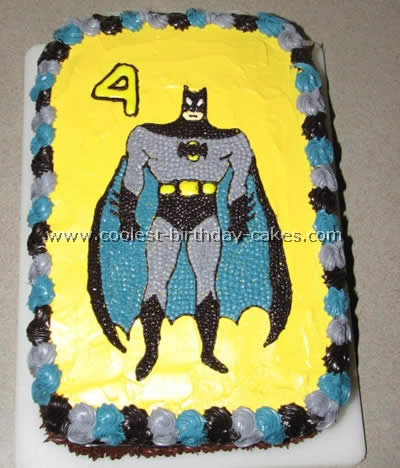 I used two 13×9 inch chocolate cakes. First, I iced the bottom one with chocolate icing then sprinkled 100’s and 1000’s on top then put the second cake on top. I used pre-made chocolate icing and added black food coloring to make the black icing. I then iced the top with yellow and the sides with black. Used the gel transfer method to get the Batman picture on the cake, then filled in with colors. 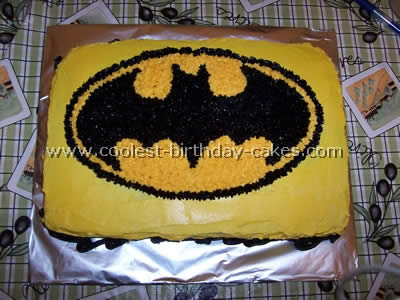 One of my friends, Rob, loves Batman and is somewhat competitive with his buddies as to who has the most/best Batman stuff. Men may grow old but they don’t grow up.

For Rob’s 31st birthday we had a barbeque at a local paintball facility and I brought the cake – Batman of course. I found the classic Batman picture on a clipart website. I enlarged it to the size I wanted (requiring printing on two pieces of paper and some assembly with tape). Then, I cut out the oval with the emblem inside it.

I baked a 9 x 13 cake (chocolate in this case) leveled it and froze it to make it easier to decorate. I used butter cream icing and mixed a deep yellow a slightly lighter yellow and black. For the black I used the Wilton food coloring paste. I smoothed the light yellow icing to the whole cake and let it set a bit. Then, I gently placed the paper oval on the cake and applied a black border using a star tip. I pulled the oval off and cut around the bat then centered the paper bat back on the cake and outlined the bat in the dark yellow. I carefully removed the paper bat and I was left with an outline for the oval and an outline for the bat. Nothing left to do but fill it in and add a border to the cake.

Cake by Beatriz B., Santiago, Chile 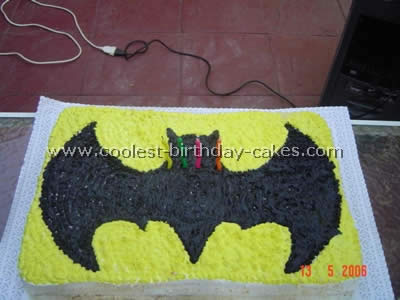 I made a rectangular yellow cake and filed it with dulce de leche and raspberry jam. Then cover the cake with whipped cream and then piped the batman picture in yellow and black using a template I made myself on cardboard.

I made cupcakes which I frosted with the same yellow and black whipped cream and then put batman toppers on them (with batgirl for the girls). I printed from the computer, then laminated them and glued a toothpick on the back. Kids loved them! 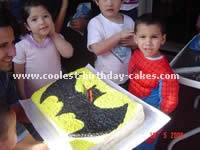 Cool Cake for a Fifth Birthday 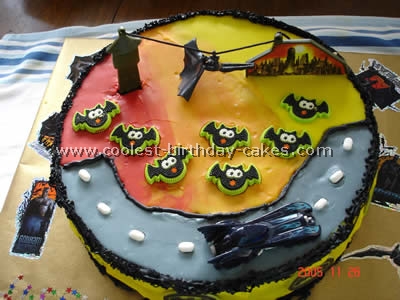 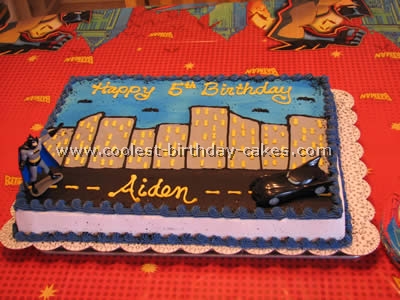 This cake was made from a batman picture for my son’s birthday. Lots of BLACK! We took pictures of the kids with black teeth.

The sky was sprayed first then I added the grey buildings as one solid grey stretch. I outlined them in black and added the yellow windows last.

Black is really hard to get dark enough so I bought it from a local cake supply store. 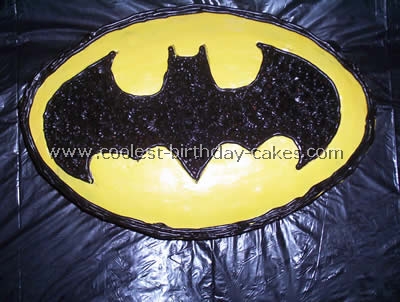 I made this batman picture logo for my son’s 4th birthday. I used yellow and black icing. For the bat I placed a template on the cake and iced around with yellow. I then removed the template and filled in the black. 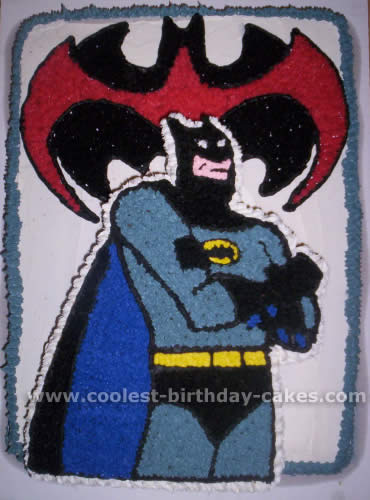 This cake was made for my friend’s nephew. Batman is actually another cake cut out in the shape of batman sitting on top of the other cake. My friend helped me out with this one, as she wanted to learn how to decorate cakes. Not really too much to this one other than the basic baking, cutting out and icing. We had fun making this and it turned out pretty good. 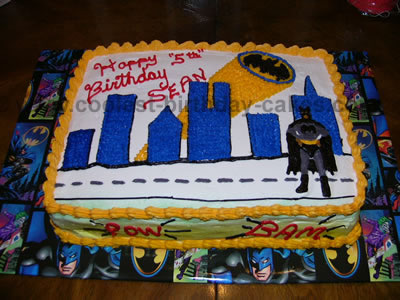 This Batman picture cake is a regular Dunkin Hines yellow cake mix sheet cake. I baked it according to directions.

My son LOVES Spiderman & Batman. Last year I did Spiderman and this year he wanted Batman. I took the idea of Gotham City and Batman’s logo in the sky. I printed a picture of Batman to the size I wanted and cut out the appropriate pieces so I could place it on the cake to make an “impression”.

Once I pushed it into the icing, I peeled the paper back and piped the outline of him. I then went back, piped the rest of the city, drop-starred it in and then filled in the areas of Batman. Lastly, I hand drew the light in the sky and the batman logo and filled that in as well. It was a hit. 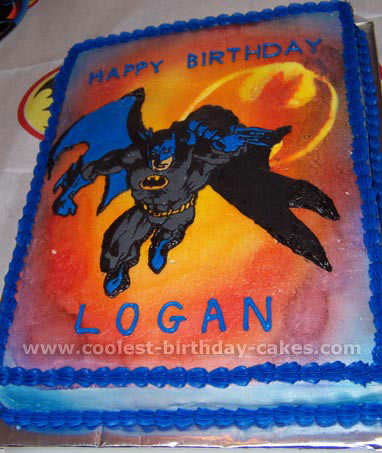 For my nephews birthday cake I used color mist spray for the background effects. I sprayed the lightest color first. I then used a stencil for the bat signal and sprayed the darker colors over it. The butter cream transfer helped me get nice detail for the Batman picture. 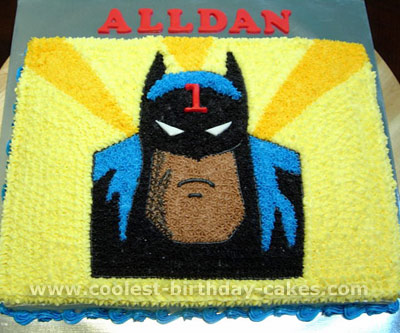 I made 2 sheet cakes and transferred each batman picture onto each of the cakes marking it with toothpick. I then outlined the pictures and piped in the details. The names and age was cutout from fondant. 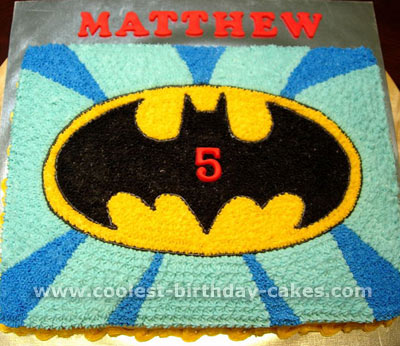