This lighthouse cake was my first attempt at a 3D specialty cake. I watch Ace of Cakes and other baking shows on TV often and have always wanted to create an edible masterpiece. My mother in law’s birthday offered me that first opportunity to try it out. I wanted to give her a gift that nobody else could give. Knowing that my mother in law collects everything lighthouse related, I began my search for the perfect gift.

She had no space for more knick knacks and I had already given her a special blanket made from a photo taken during our family’s weekend stay at a lighthouse, adorned with photos of all of the grandchildren. How could I possibly beat that?  I wracked my brain for weeks, and while watching an episode of “Ace of Cakes” on TV I was inspired and decided that a lighthouse cake would surely be the gift of a lifetime.  It couldn’t be that difficult to create a lighthouse out of cake… or could it?  I was about to find out.

I made a list of needed supplies and then hopped online to search for a workable fondant recipe. I spent 2 weeks just planning this cake. The more I planned the more details I wanted to add. My husband suggested it would be easier to work from a photo, so I spent 2 days online searching for just the right lighthouse to replicate in cake. I printed the photo and once more went through the list of needed supplies and added some more.

Then we went shopping. The cashier at the store asked a lot of questions as we piled the conveyor belt full of baking supplies. I don’t think she had ever seen anyone purchase almost $100 worth of supplies intended for 1 single cake and the questions came so fast it was hard to keep track of my spending and answer her questions at the same time. I kept telling her this was an experiment.  As we were putting the bags into the shopping cart to leave the store she wished me luck, to which I replied, “thanks, I think I’m going to need it!”

Once home the baking began. I have a very tiny kitchen with almost no counter top to work on, so the first challenge was finding where to put all of these layers for the cake, since they needed to cool before I could stack and frost them. I only own 1 baking rack. While the first layer was baking I cleaned out my refrigerator, moving condiments and leftovers to the basement freezer and then outdoors in the cold into coolers and Rubbermaid tubs to make space. As the first layer was cooling the next layer went into the oven. By the time the 2nd layer was coming out of the oven it was time to move the first layer into the fridge. Layer after layer I repeated this process until I thought I had enough cake to work with.  (I had no idea how much I would need or how large this cake was about to get… boy was I in for a surprise!)

When the baking was finished and all but the last layer was safely stacked into the refrigerator then I began to make the butter cream frosting.  Once the frosting was complete and set into the fridge to stay cool, then began the job of making the fondant. 6 hours after the baking had begun and I was ready to tackle the decorating.  I asked my husband to assist as I was beginning to feel overwhelmed. I was trying a new idea for the cake recipe and wanted to fill it with a seedless raspberry jam, (my mother in law’s favorite) so began with that. As I approached the 5th layer and realized that the cake was not going to be tall enough to look like a lighthouse I started to worry about the stability, so sent my husband to search for a wooden dowel to insert into the center.

Luckily we had an extra one laying around from perches we had recently made for the bird cage. After a quick washing to remove dust, in went the dowel and the layering continued. As the last layer went onto the cake I again decided it wasn’t tall enough, so more jam and on to the scrap pieces cut from the tops of each layer when I leveled them. I used every bit of cake I had baked before I felt the lighthouse was proportionately tall enough. Using a bread knife (for lack of anything better in the house) my husband helped as I shaved the sides of the cake to even the tiers and achieve the basic shape.

Then came the butter cream frosting to “dirty ice” the cake, just as I had learned from watching the TV shows. Next I was ready for the fondant. It was very heavy and very pliable, but I rolled it out with a rolling pin and when I couldn’t roll it anymore I decided it was ready and asked hubby to hold the cake as I attempted to wrap the fondant around it. As I began to wrap the fondant the first part started to slide off, so I stopped, rolled it thinner, and tried again. Same result. I tried 4 times to wrap the fondant on the cake and each time it was so heavy that it slid right off the cake. By now it was pushing 11pm and the birthday party was scheduled for noon the next day, and it was an hour drive away.  I started to panic.

As a last resort I begged hubby to help me cut out fondant “bricks” and I began the painstaking task of laying them onto the cake, 1 brick at a time. It took 2 hours just to lay the bricks to cover this 2 foot tall cake. When that was complete my husband handed me the top piece we had made from cardboard, toothpicks, and some cheap gold chain found in the jewelry section of the store. When the toothpicks didn’t work we fell back to cutting some bamboo skewers we had sitting in a drawer. They were a perfect fit.

Next came the light. I had found a submersible light in the floral department of the store and thought it a perfect way to make this cake really come to life, but I still lacked the glass-like dome to cover it. Hubby & I searched through every cabinet in the house until I found a clear plastic disposable cup left over from picnic season.  I cut it down to the right size and laid it over the light.  Another perfect fit. The last challenge was to form a top for the lighthouse. All of the cake had been used and it was too late to bake another layer.  A quick search through cupboards and I came up with a funnel. I quickly wrapped it in fondant, gave it a quick spray with some food coloring spray (also found at the store) and called it “perfect”.

I was adding the finishing touches, spraying the icing waves I had created out of butter cream just as hubby was waking up at 7am. I had just enough time for a quick 1 hr nap before needing to get ready for the party. While I napped hubby went in search of a box for transport.

I was a nervous wreck the entire 1 hr drive. Every turn had me reaching back over the seat to check on the cake and make sure it was still standing. We arrived at the party right on time and brought in this giant box and set it on the table, telling my mother in law she had to leave the room while we unpacked her gift. We cut the box away because I was too afraid to lift the heavy cake out from it, turned on the light via the switch underneath, reset the top in place and turned out the lights in the room and then we realized there was nowhere to put 70 birthday candles. Using some of the extra fondant I had packed for emergency repairs, we quickly fashioned some small “boats” (they looked more like gondolas) and some rocks, and an anchor shape, and placed them around the cake to make space for every candle.

Then we called the birthday girl into the room.  As she rounded the corner and caught sight of her cake she stopped, her mouth dropped open (you can see this in the 2nd video link) . As she slowly walked into the room she glanced at her wall where her calendar hung, and there on the calendar was the very photo I had chosen online to use to fashion her cake. I had no idea beforehand, so I was just as shocked and surprised when I saw it as she was. As the candles were being lit (I was running the video camera at this point) I noticed they were beginning to singe the fondant on the cake and the jokes began about whether or not the smoke alarm was working.

It took 30 minutes to convince her to let us cut and eat the cake. She insisted I take a lot of photos and video of the cake to capture it before we cut into it, and she cringed with that first cut.  As she began to eat her slice of cake she broke out into a huge grin and announced to everyone that it tasted as good as it looked.  I was so relieved.

My mother in law doesn’t give hugs often, but that day I got the biggest, warmest hug from her as she told me I had made her birthday the best one ever and she would never forget it. The best part in all of this was that I didn’t just make her day perfect, but her reaction and happiness also made my day, too.

A few days later my sister in law called and begged for me to make her son’s graduation cake, saying the entire family was so won over by the lighthouse they couldn’t think of anyone else they wanted to make another special cake for the family.  And with this, my cake decorating days began… each one becoming more difficult than the next. 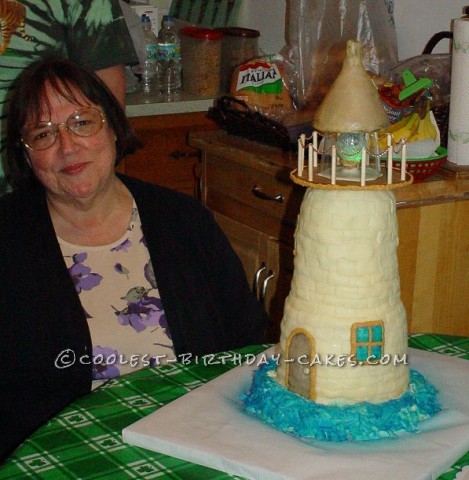 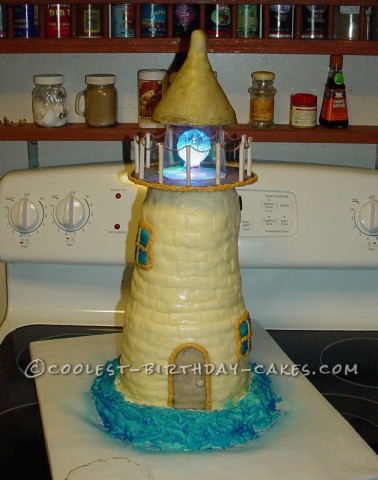 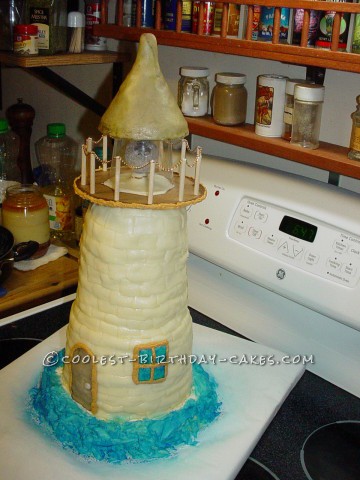 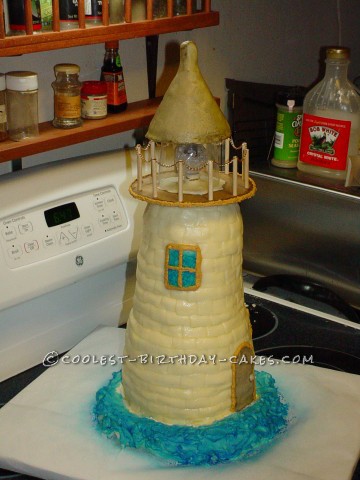 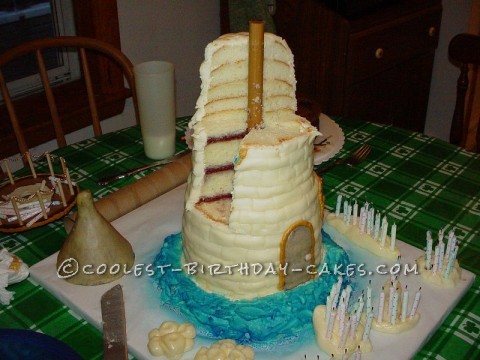