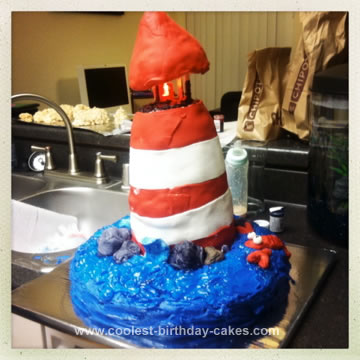 We just got back from a cross-country road trip (from Southern California where we live all the way to the tip of Maine), when my youngest daughter had her 3rd birthday. Because we had spent a significant amount of time in Maine (and I lived there as a child myself), I decided to do a Lighthouse theme cake.

I used a marble cake for the base – dirty iced it in blue butter cream frosting. I added a layer of gel so it would look like water and make the waves out of fondant. I added edible glitter (blue/green) to the waves to make them sparkle!

I cut a hole in the center of the cake and made the entire tower out of rice crispy treat – dirty iced it in butter cream frosting and then covered it in dyed fondant – blue and white. I made the top a separate piece and stuck it on the structure with Popsicle sticks iced in black frosting. This was the flaw – it sunk over time so I recommend waiting until the day of the party to add the top part!

The rocks were pure fondant mixed with a small amount of black dye – I then kneaded and twisted it to make them look individual with their own markings.

I made the lobster out of red dyed fondant – and bought a fun LED light (that flashed like a lighthouse light does) and pulled just the light out – it came with no string because it was battery operated so I just stuck that inside so it flashed like a real lighthouse does!

The girls loved it but since there was an obscene amount of dye involved I gave them pieces with very little frosting on it.