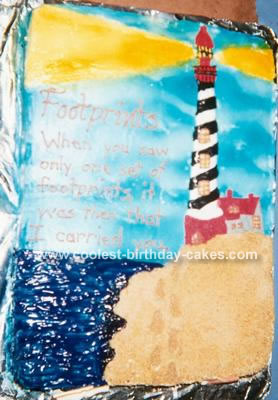 When my aunt’s husband and his siblings began planning their mother’s surprise birthday party, she couldn’t wait to tell them that her niece makes cakes. With that, they nominated her to supply the cake. She didn’t know much about her mother-in-law’s likes or dislikes so she had trouble coming up with an idea for the cake. When she called me to ask if I would make it, she said, “I don’t know what kind to make. All I know is that she’s a Christian. You’re the one who makes the cakes. You come up with something and I’ll be happy with it. Just surprise me.”

I had just made a cake for my mother-in-law’s church that looked like an open book. On the left page, it had “Holy Bible”, written in fancy letters, and praying hands, that I had made out of candy using a candy mold, all of which were covered in gold luster dust. On the right page, it had the entire scripture of John 3:16. I finished it off with a ruffled border to look like the old Bible covers did.

I had thought about making this cake for my aunt’s mother-in-law as well, but I don’t like making the same cake twice. Even if I have to, like for characters, I like to at least change the color of the clothes if I can. Then, I thought of another cake I had made for my mother-in-law’s church. I had wanted it to be a beach with a lighthouse, footprints in the sand, and the footprints scripture, just like this one. When I was making it, I ran out of time and didn’t get to put the lighthouse on it, so it ended up just being the beach with footprints in the sand and the footprints scripture. I had regretted not getting to finish the cake like I wanted to just because I miscalculated the amount of time it would take and the amount of time that I had. I thought “That would be the perfect cake. I’d finally make it and stop regretting it, my aunt loves lighthouses and has at least one picture of them in every room of her house, and her mother-in-law would have a nice birthday cake.”

So I made the lighthouse cake and, when I took it to my aunt, she liked it so much she started crying. Later, she said that her husband’s entire family, especially his mother, liked it and was glad they put her in charge of the cake.

For the clouds, ice the cake white and tear a paper towel longways. Starting at the top, hold the paper towel over the cake, not touching it, about one inch away and spray across length of paper towel with blue food mist, found in grocery stores in the cake aisle. Spray however light or dark you want your clouds to be. Move the paper towel about an inch down on the cake and spray again. Continue until you get the desired number of clouds (More than one paper towel may be used to give different patterns). If making light come from the lighthouse, cover that area with wax paper before spraying to keep it white. When finished, remove paper from light area.

After the clouds are dry, for the light, cover the rest of the cake with wax paper, except for the light area, and spray it with yellow food mist. For the water, I used piping gel that I dyed blue, but you can use pre-mixed gel icing from the store. Use a knife to play with it to get the wild ocean look For the sand, I used graham cracker crumbs.

Coolest Under the Sea Cake