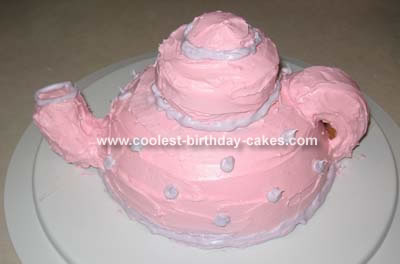 We had a Tea Party for our daughter’s 4th birthday. I wanted to make a tea pot for the cake. I baked the body of the tea pot in a large bowl. The other pieces of the tea pot were made from 2 plain donuts.

I turned the tea party cake baked in the bowl upside down. I put a little frosting on the top and put one whole donut on top for the lid. I cut one donut in half. Half became the handle. I took the other half and cut about 1” off. The larger section became the spout. The smaller piece sat on the very top of the cake.

I used skewers to connect the “handle” and “spout” to the rest of the cake. I frosted the entire cake pink (our daughter’s favorite color) and added purple accents.

To continue the tea party theme, I baked cupcakes and turned them into tea cups. I frosted the top and sides of the cupcakes. I added purple accents similar to the tea pot. Then I made pink handles out of card stock and stuck them in the sides of each cupcake. The party favors were in little bags folded like tea bags with the tags. We served tea sandwiches and fruit. I was really happy with the results.