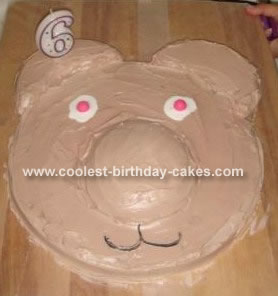 Part of my son’s birthday party consisted of making stuffed animals, teddy bears and the like. The gym where we had the party supplied all the paper goods so I didn’t need much for a theme, but decided I wanted to do a teddy bear cake to go along with the teddy-bear idea.

I had no idea how to do it, so I thought I’d see what I could find on the web. This site had some great photos of cakes that looked simple enough for me to try, hooray!

I made a cake recipe for a 9×12 pan and added a cake-mix-extender recipe (also found via Internet), since I wanted to fill a 12-inch round pan and a 6.5 inch round pan.

I half-filled the small pan, then poured the rest into the large pan. If I did it again I’d make more batter for the big circle, but really, does anyone complain that their kid got too little cake? (And my son likes the idea of cake more than he eats it.)

When they came out and cooled, I cut the rounded top off the small cake and made it the bear’s nose. (I gave the big cake a thin layer of frosting before putting the nose on.)

I cut the rest of the small cake in half and rounded each half off to fit against the large cake for the ears.

My son likes vanilla frosting but I didn’t want to make a polar bear, so I mixed 1.5 tsps of cocoa powder into a can of frosting for a light-brown color. It hardly changed the flavor at all. (I also liked that by stirring less, it stayed a little streaky, like real fur would be.)

I frosted all the pieces together and used some cookie-decorating icing to make the whites of his eyes. We used gumball vitamins (my son’s contribution) for the pupils. I had a black food-decorating marker on hand to make the smile.

It was a big success!