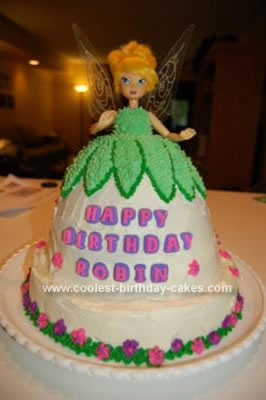 Thank you to all the moms who submitted Tinkerbell cakes on this site! I used some of their pictures as inspiration and copied their ideas, especially Tinkerbell Cake 52 (by Sarah H. in New Haven, IN).

I made my Tinkerbell Birthday Cake using a boxed white cake mix. It took about 3+ cake mixes for the whole thing. I used a 10 inch round pan for the base of the cake and a glass bowl for the dress. The bowl was an old one that I had from an old stand mixer. The shape just happened to be the right shape for what I wanted to make, without having to go buy a specialty pan.

To bake the large dress cake in the bowl, I lowered the oven temp from 350 to 325 and baked it a very long time (low and slow). I think it took about an hour and 45 minutes total. I just kept checking it and resetting the timer.

Also, about a week ahead of time, I made the icing flowers using premade pink and purple decorator frosting. I used the flower tip (I think it was #107). I let them dry on wax paper and stored them at room temp for a week so they could harden.

When I was ready to decorate the cake, I leveled the base cake and frosted it with premade frosting (Pillsbury Creamy White). I cut a hole in the center of the bowl cake, carefully scooping out the cake to make a place for the Tinkerbell doll. I wrapped Tinkerbell in Saran Wrap (no dress or shoes on her) and secured the wrapping with masking tape. I also put masking tape around her chest so that I could decorate onto that instead of directly on the doll. I then set the dress on top of the base, put Tink in place, and frosted the dress white.

I used the regular green icing and the leaf tip (#67) to make a squiggly pattern around the base. Then I pressed my pre-made flowers into the frosting. I used store bought letters (Cake Mate) to spell out happy birthday Robin. I also plan to use 3 pink candles on the base in front of the dress at the party (and for some additional pics) so that I’ll remember which number birthday I made this cake for.

I tried securing the wings into the back of the cake with toothpicks. Ultimately, they are really just smooshed into the frosting because of the angle of the dress, but they look fine from the front and okay from the back.

My daughter was thrilled with how her Tinkerbell cake looks and so am I! Good luck if you try this cake. It was really pretty simple and fun to do, too! I’m no expert at cake decorating, so I decorated it when my kids were out of the house for a few hours. It took me a little over 2 hours to decorate it as I took it slow so I wouldn’t make any sloppy mistakes.