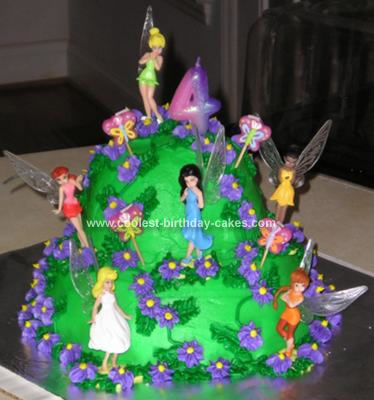 My daughter wanted a Tinkerbell party for her 4th birthday. I decided to create a “fairy hut” cake using a pack of Disney fairies, from the new Tinkerbell movie. I found these and the butterfly candles and “4” candle at Target. She absolutely adored this Tinkerbell cake!

I baked the cake in 2 Pyrex bowls, a 10 cup and a 3 cup capacity, at 350 until they were cooked through (which took a while for the large bowl, just keep checking). I had to use a wooden skewer to check if the cakes were done, because they were so deep. I used Wilton’s buttercream icing recipe and the Wilton’s icing colors. The colors I used here are Kelly green for the lighter green, a mix of Teal and Kelly green for the vines and leaves, Violet for the flowers, and lemon yellow for the centers of the flowers.

I first iced the large cake, then put the smaller one on top and iced over all of it, smoothing the icing with a wet knife. Then I added the fairies so I could ice the decorations around them. I piped on the vines using the writing tip, then added the leaves with a leaf tip. This was my first attempt at making leaves, so I practiced on wax paper first. Then I added the flowers with the large star tip and put the yellow dot using the writing tip.

I had a lot of fun making this and can’t wait to see what my daughter wants next year!