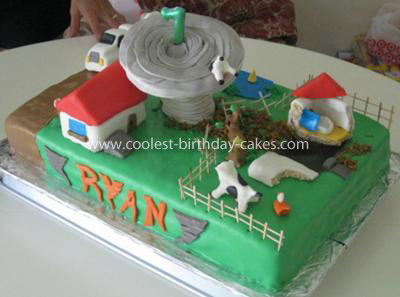 My son is absolutely obsessed with tornados, so for his 7th birthday I decided to make what I hoped would be the ultimate cake for him. This was my second attempt at making a fondant-covered cake. If I can do this, anyone can.

I started about 4 days prior to the party by making 2 batches of marshmallow fondant. I learned how to make my own by watching a few youtube videos. It costs less than $5 to make about 3 pounds and it is really not that difficult. When you consider store-bought will run you over $20 a batch it just makes sense to go home made, and it tastes better too.

The night prior to actually assembling the cake I baked 2 19x12x2” half-sheet cakes. Each pan took 2 boxes of cake mix. These are really big cakes and will feed an army, so a lot gets wasted, but I needed the “real estate” to include everything I wanted to put on the cake. I let the cakes cool on wire and then leveled them with a long bread knife. After applying the filling I stacked the cakes and lightly coated the outside with frosting so the fondant had something to stick to.

When I was ready to color the fondant I used a gel-based food coloring rather than a water based dye. The gel doesn’t mess with the consistency of the fondant as much. For the brown fondant I used cocoa powder along with food coloring to get a nice rich color. After dying a good chunk of the fondant green it came time to roll it out and cover the cake. I learned to do this by watching some youtube videos. Now I warn you, trying to cover a 19x12x2” cake with a single sheet of fondant was nearly impossible. It was so hard that I gave up and decided to improvise by making a “dirt road” on one end of the cake. Once the cake is entirely covered in fondant you can leave it out, uncovered, and it will still stay moist for days. Finally, I made 2 batches of traditional Rice Krispies Treats. I make them in loaf-pan so I had 2 big blocks from which I could carve out the creations.

The next morning I got down to business and started decorating. First I created the tornado out of Rice Krispie treats by simply carving from the block with a bread knife and a pairing knife. For the very top of the tornado I stacked a few thin layers Rice Krispie Treats to get the really wide effect. I made sure it was balanced so could stand on it’s own.

All the structures and the Storm Chaser Truck on the cake are made from Rice Krispie Treats. The animals are hand-molded fondant. I used brown and green dyed coconut to create the path of destruction behind the tornado. The fence is merely some toothpicks I glued together.

My favorite part of the cake is the destroyed house. I created a basement by cutting into the cake and excavating down to the bottom layer of cake. I coated the bottom and sides of the hole with gray fondant.

The cake was a big hit at the party. It was a lot of work, probably 6 hours total. If you spread it out over a few days it really isn’t that bad. I’m not sure what you would pay for a cake like this, but I spent less than $30, including the cake pan. 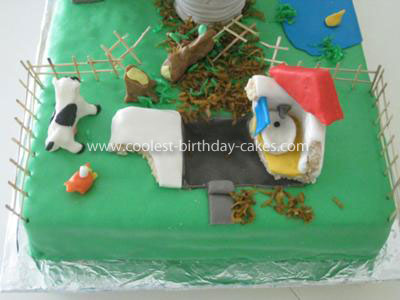 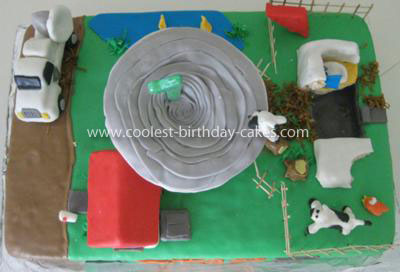