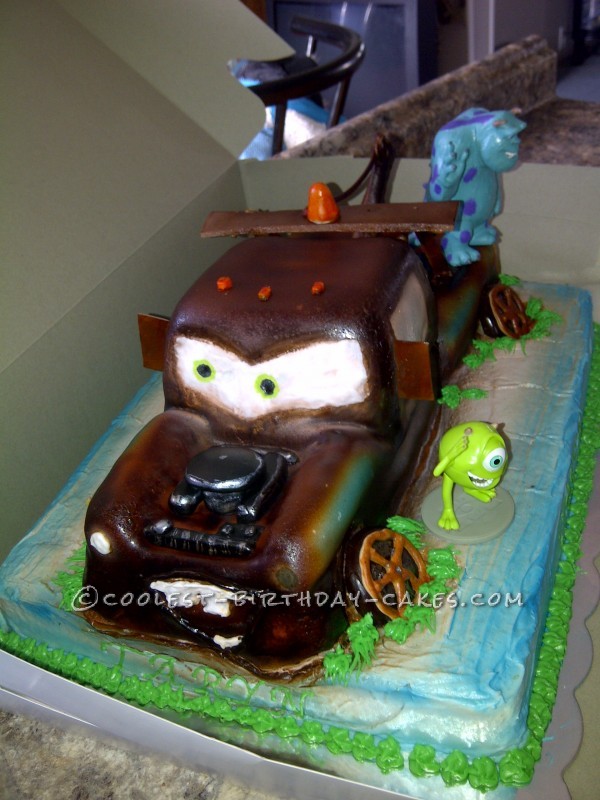 I had a lady call me asking if I could make a Mater cake for her 15 year old daughter.  I have actually never made a 3D cake like that before, so I wasn’t sure I would be able to do it. I just bought a small square pan, a 6x6x2, and baked 2 loaf pan cakes. I cut the loaf in half, used one half for the front, another half for the cab and the square for the bed. Then I just started carving to get his shape.

I froze the cake to make it easier for frosting and carving then I covered it in fondant and started airbrushing. That’s when I learnt to not airbrush a frozen cake! As it began to thaw the colors all started to run and totally ran off the cake! It became very colorful! and then I also had put it on a small round cake so I could put tires underneath it and yeah, having his front end hanging off the end of the round cake. That wasn’t a good idea, the front end fell off after it thawed out. So I had to start over!

This time I put it on a full sheet of cake and just cut out the cake for the tires and tried to just make it look like it was squatting.  I waited until it  thawed before I began coloring. When I made the winch part in the bed of the truck, it wasn’t much fun, the fondant  wasn’t quite hard enough and when I started putting it together pieces broke and bent and I had to redo those, but it was an awesome cake. I was very proud of how it turned out for not doing anything like it before! I had fun and I also got frustrated with it but it was a very good learning experience!