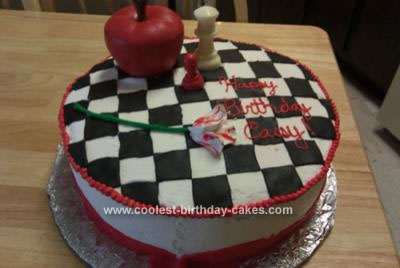 I personally do not like the Twilight saga at all. However, my 14 year old sister is very much obsessed with it. So here you have it a cake inspired by the covers of the 4 twilight books.

The apple is made of chocolate (I used candy melts) and is actually hollow and has two necklaces which I bought for her inside. The chess pieces (queen and pawn) are also made of chocolate. The flower is royal icing which I let harden and then hand painted with straight red gel food coloring. The stem is a small piece of fondant.

The entire cake was red velvet (per the birthday girl’s request) and then iced in white butter-cream (I did crumb coat this). Got the frosting smooth and then for the squares I cheated and bought black fondant because I am not even going to try to make black. I rolled it out really thin and then used a ruler and a pizza cutter to cut squares which were all equal. These were then just laid on in the appropriate pattern.

For the ribbon I again bought the fondant, simply because it was red and I did not want to mess with it. I rolled it out and cut it, wrapping it around the bottom of the homemade Twilight Saga cake. The ‘tear’ was a bit tricky but I just messed with it until it did something close to what I was wanting. The beads at the top were pipped on using buttercream as was the writing.