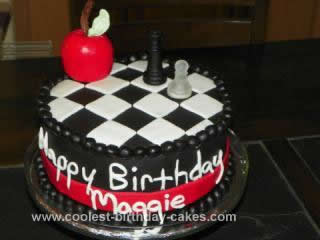 This Twilight Birthday Cake is the cake I made for my daughter’s 14th birthday. I knew I wanted to do a Twilight themed cake, but didn’t have a specific plan. This cake is modeled after a beautiful cake I found on Miss Catty’s Cake. Thanks Ms. Catty!

It is a two layer, single tiered red velvet cake filled with buttercream icing. It was my first attempt at decorating with fondant. I purchased black and red fondant from Duff’s line. I also bought a small bit of white Wilton’s fondant. Rolling the fondant was much easier then I expected, though transferring it successfully to the cake took a couple of tries.

Finally, I was able to do it by rolling it around the rolling pin. I covered the whole cake in the black fondant and then cut squares of white fondant and placed it in a checkerboard pattern on the top of the cake. I made a red fondant ribbon for the bottom and lots of black fondant balls for a border. I made the apple out of red fondant and the leaf from tinted chocolate poured into a leaf mold. I rolled the words out of white fondant. I just didn’t have it in me to try to make the chess pieces, so I borrowed those from a glass chess set.