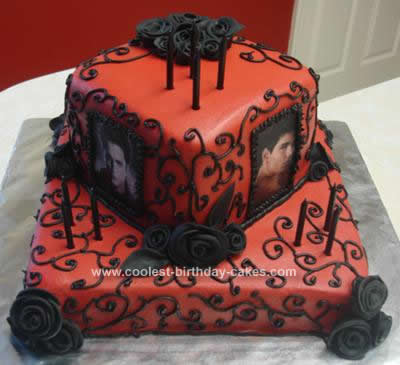 My daughter is really into the Twilight Saga, and wanted her cake to reflect her invitations and party ware. The plates were black and red with pictures of Edward and Jacob, so I just took that and went with it and made this Twilight Edward and Jacob Cake.

My base cake is a medium square cake, with a smaller square cake turned to make a diamond shape. We decided to go with a “blood red” cake with black accents. Trying to make something that was sort of Gothic looking, without being just morbid. We found some edible wafer photos on Ebay, and used those to tie in the Twilight theme. Of course, we have Team Jacob and Team Edward party go’ers, and they enjoyed the fact that we had both teams represented!

I first iced my cake with buttercream icing, and smoothed it down with a Viva papertowel. To get the “blood” red color, I mixed in a little brown coloring with the red, and after it sat for a while, it got darker and turned out to be the perfect color!! I used black buttercream icing to make the designs all over the cake, and black fondant for the roses. Added in 10 candles in tiers to give it a sort of chandelier look.

It was a huge hit, and all the Vampires and Wolves were extremely happy!