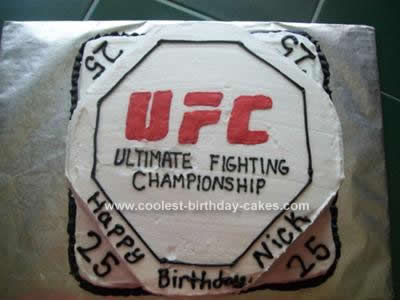 My husband is a huge UFC fan so I decided to make him this UFC Birthday Cake Design for his birthday. I made it using 2 9″ square cake pans. A few days ahead of time I made the UFC writing using the color flow technique and then dying it red. I covered the first square cake with buttercream icing. Then put it in the fridge so the icing could harden. The second cake I cut the edges off to make an octagon shape. So that it would be the same shape as an actual UFC cage.

I placed the octagon shape cake on top of the square cake first then I iced it. So I wouldn’t mess the icing up when I placed it on the bottom cake. For the black icing I actually used store brought milk chocolate icing & dyed it black.

*I actually found that it was a whole lot easier to try dying icing if it was already brown rather then starting from white. Cause you will use so much black dye trying to get it to look like black, that when it’s time to ate the cake the icing will turn everyone’s mouths completely black.*