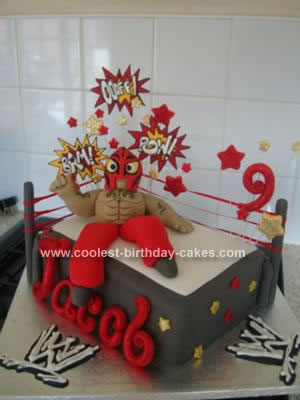 I was asked by a friend, to make a homemade Wrestling Rey Mysterio cake for his son’s 9th birthday. My mum did a cake decorating course when I was a kid and I remember watching her work with icing and have been interested ever since and have dabbled in cake-making for friends and family.

I was given a wrestling comic and got to work having a look through for pictures that I could get some inspiration from, as I’m not a fan of wrestling and had no idea who ‘Rey Mysterio’ was.

I thought that some ‘Batman style’ lettering would look good and also some WWE signs, but decided that making them out of fondant icing would be hard, so made some ‘runouts’ instead. Runouts are pieces of icing that have set hard and can be good for doing fancy lettering.

I drew out the lettering and shapes that I wanted on siliconized baking parchment making sure that the pencil marks were on the under side of the paper. I taped the paper to the back of my cake board with masking tape, then I flooded out each section (a little like colouring in, but using icing instead of felt tip pens). A cocktail stick is good to use for teasing icing into the shape you need. Leave each section to dry before putting on the next colour.

Runouts can take days to dry, so I find it best to start them about a week before the cake is needed and I leave them in my airing cupboard. Within a couple of days you should find that the icing is beginning to lift off the paper. If it is still stuck then leave it longer to dry. I usually leave mine about 4 days then have a look at them. If they look like they are lifting from the edges, but are still stuck in the middle, slide a cocktail stick underneath, using a backwards and forwards or side to side motion… not lifting as they might break! Once they are free from the paper, leave them again to continue drying out, until you need them.

I cut out some different sized stars using fondant icing and used some paper covered wires that I picked up from our local cake decorating shop, to make a star burst. I put a little gum Arabic on the tip of each wire before twisting it into the stars. This makes sure that they don’t start spinning or falling off the wires. I also moulded the name and age out of fondant icing. I then painted a little gum Arabic onto the pieces and covered them in edible glitter.

The glitter is quite expensive… £3 for a tiny pot… and I find it easier to use a small tea strainer to sieve it over the pieces. If you keep your icing pieces on a piece of parchment paper, you can then gather the surplus glitter and put it back into the pot when your pieces have hardened off.

I’m not a baker and my sponge making skills are pretty shocking, so I bought 5 slabs of ready iced and creamed Madeira cake from the supermarket. I had a good root through all the slabs to find ones that were similar in size.

I used a 15″ square board and placed the slabs upside (icing side) down, on the board, thus ensuring that the cake stuck to the board and didn’t move. I used jam between each slab to ‘glue’ it together. I find that seedless jam is better for this. The slabs were slightly uneven, so I used a bit of rolled icing under the bottom to fill in gaps and lift any sides that were making it wonky, then I carefully trimmed a high spot off the top with a sharp knife. I covered the whole thing with more jam and put it to one side.

I then opened two packs of 500g icing and used a coloured paste to knead the icing to the colour that I wanted. I rolled out the icing and covered the cake. I found that by using the palms of my hands to rub the cake, I got a really smooth finish to the icing and didn’t get unsightly icing sugar marks on the dark icing. I then used a piece of paper as a pattern, to cut a white piece of icing for the top of the wrestling ring. This was also secured with a touch of gum Arabic.

The corner posts were made out of plastic dowels (from the cake shop) covered in icing and left to harden off overnight. I secured them to the homemade Wrestling Rey Mysterio cake with thick, royal icing (icing sugar and egg white).

The figure was moulded out of fondant, a piece at the time, and I used a plastic dowel to make sure he didn’t fall over, placing the pieces onto the dowel one at a time until he was assembled. The tattoos were painted on using coloured paste and a thin paint brush. I had a few problems with his elevated arm, as the icing was too heavy, so I ‘glued’ it with royal icing and packed underneath the arm with clean bubble wrap, then left it overnight to set.

Once I had assembled all the pieces, I carefully strung some 3mm ribbon around the posts and held it in place with a touch of royal icing. My friend and his son were made up with it. 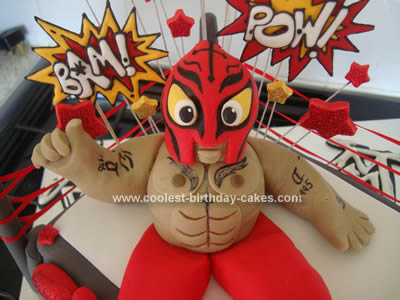 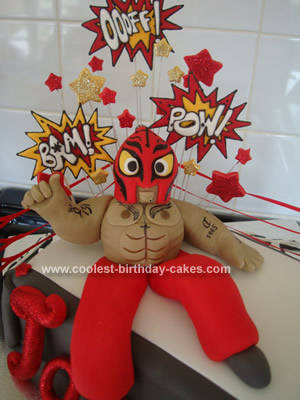