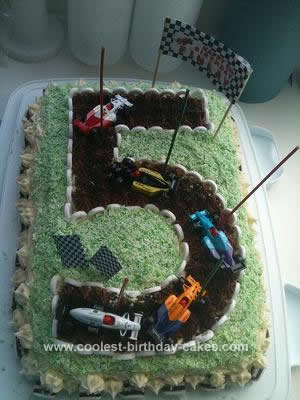 This Racetrack Cake was made for my son’s 5th birthday party. He wanted a racing theme, so I checked on this website for some ideas!

As there were a lot of children for the party, a sheet cake was the biggest and easiest cake to cut for party bags. It was held off-site so it needed to travel well; I have a cake box that fits this size well.

I used a yogurt-based cake mix that I’ve used for years. It is very easy as you use the single-serve yogurt pot to do the measuring! It also keeps very well, which is useful for cakes that are prepared a day or two ahead. It is rather soft, so you need to bake a day before icing if you need to cut the cake into shapes or use a cake leveler.

1 x 150g pot plain yogurt (you could use fruit/toffee if you wish).

Stir well then sift in:

Mix well. At this point you could also add finely grated rind of orange or lemon, or at the flour-sifting stage, add 2 tbsp good cocoa powder and a tablespoon of milk to make a chocolate cake.

For this cake, I sandwiched 2 9×13 cakes with boiled raspberry jam and buttercream (homemade – 250g butter, 1kg icing sugar, 1tsp vanilla for the whole cake, plus leftover chocolate icing for the racetrack). I then did a thick crumb layer of buttercream. I used a paper template for the ‘5’ and placed the polo mints (lifesavers just as good) around it to make a shape for the racetrack.

Having taken that template off, I used a palette knife to spread buttercream evenly outside of the ‘5’. I then put a liberal amount of green-dyed coconut to simulate grass, and pressed it into the icing slightly. I used chocolate icing (from another cake I was doing simultaneously!) to do inside the ‘5’ racetrack, using an open star tip. I then carefully put chocolate sprinkles on the racetrack ‘5’, and placed the cars on the track. I used black and white mints on the edge of the cake – I have to say they weren’t necessary, but if I was icing it on the same day as eating, I would have used Oreo cookies.

On the computer I made some black and white checker flags, and the personalized ‘Happy Birthday’ banner. The flags were printed on to sticky labels and folded round toothpicks. The banner was taped on to two bamboo sticks for the end of the racetrack (it was two-sided).

I found relighting thin taper-candles and placed them immediately next to each car, which were lit just before presenting the cake.

My son was over the moon! The only sad thing was because it was a hired venue, no one really got to see the cake until just before it was cut up for party bags! I have learned my lesson and will have my cakes out on display for the party duration in future!