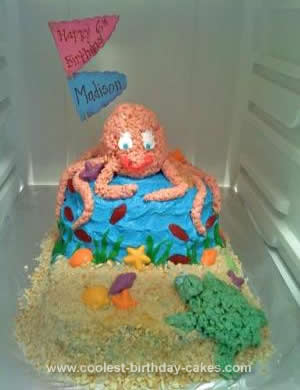 My five-year-old daughter asked to have an ocean themed birthday cake. I searched the internet for ideas of a Ocean Octopus Birthday Cake and decided I could tackle her request.

I started by baking a 9×13 yellow cake for the base. I used two round cakes on top. I secured the cakes with a few skewers and frosted between each layer with store bought frosting. Next, I frosted the entire cake with a bright blue frosting to resemble water and added a few blue sprinkles for shimmer. I assembled the octopus next using a rice krispie recipe. Be sure to grease your hands! (I added a few drops of food coloring to the marshmallows before mixing in the cereal.) I shaped the octopus legs and body and secured each piece with toothpicks. I used frosting to make the octopus eyes and fruit roll-up for the octopus mouth.

To make the sand, I crushed up vanilla wafers and sprinkled around the base. The seaweed is made from green fruit roll-ups that I cut. The seashells are chocolate molds. My daughter picked the colors. The sea turtle was also constructed like the octopus. I used Swedish fish here and there to add a little more detail. The flags were made of card stock and were held on with a skewer.

When it was time for the party, I covered the table with a fish net and foam ocean creatures. I placed the cake in the middle of it all. The cake was a big hit!