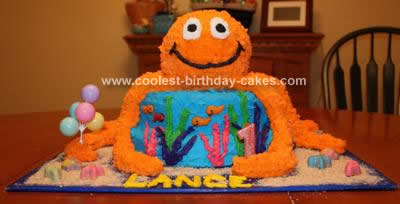 For my son’s 1st birthday I went with an under the sea theme. I first found the plates and party decorations that I wanted to use and from there I came up with the Homemade Giant Octopus Birthday Cake. I used a Wilton 12×2 pan for the bottom layer, a Wilton 10×2 pan for the middle layer and the Wilton Sports Ball cake pan for the Octopus body. I placed rice krispy treats in a glass baking dish and once cooled, cut them into 8 strips for the legs.

I used the Wilton’s Buttercream Frosting recipe. The consistency of the icing was perfect for spreading and piping. I doubled the icing recipe for both the water and the Octopus body. I tinted the icing using Wilton’s gel colors in sky blue and orange. I first iced the bottom layer with the blue then added the middle layer and iced it blue as well. Before placing the ball on top, I piped stars on the bottom so that when I set the cake it would be neat and I wouldn’t be trying to keep the colors from mixing. Next, I “glued” the top part of the ball with a layer of icing and then held it secure with 4 skewers running completely down through the cake to the board. I finished piping the orange icing on the body. Finally, I molded the legs onto the cake and reinforced them with toothpicks then covered them in the same orange icing.

I made a separate batch of icing and colored some black for the eyes, and multiple colors for seaweed and grasses. I used the Wilton gel colors in Rose, Sky Blue, Green, and Lemon. I mixed rose and sky blue to get the purple. I piped faces using black icing on fish shaped crackers and whales. The sand was created using animal crackers that had been crushed in my food processor. As a finishing touch, I used colored melted chocolates and spooned them into seashell shaped candy molds. 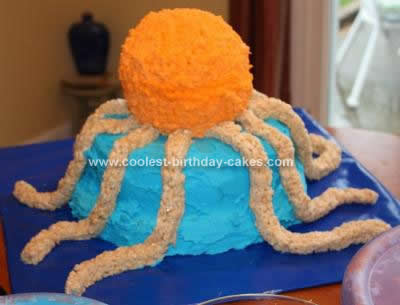 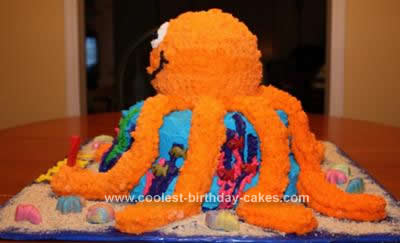 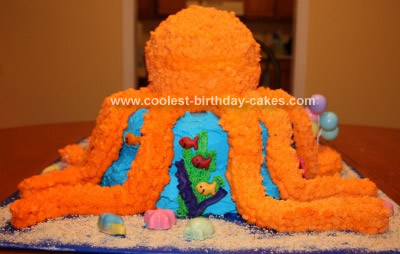