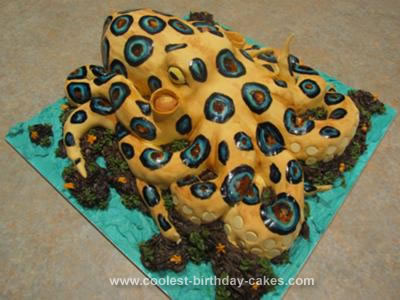 This Blue Ringed Octopus Cake is my fifth cake ever and second on this site. My boys get to choose what cake they want (once they are able to communicate) and it’s my job to make it happen. I’m a 32yo father from Perth, Australia.

My other cake is this Lightning Mcqueen cake.

Anyway, It was my eldest son’s 4th birthday this week, and after he changed his mind a dozen times, he finally settled on a blue ringed octopus cake. Why? He is interested in many things, but dangerous animals like snakes, blue ringed octopus, sharks, etc seem to fascinate him and having just got a fish tank for his birthday, something aquatic was in order I guess.

So, a blue ringed octopus it had to be. I sat back, scratched my head and wondered how I’d make this one. After searching on the net for blue ringed occy images I came up with a few basic concepts – some of which were knocked back by my wife for being too easy, as she has high expectations (as do all of her friends) of my cakes and jokingly demands the highest quality (maybe not so jokingly).

The cake was baked in two tins – some sort of butter cake, vanilla mix. I bake the cakes myself, but they are made from cake mixes that I purchase from my local cake supplier as they are quick and taste really good (I take no credit there). For decorating, the cakes were stacked on top of each other and joined with a jam layer. Then I got stuck into the carving. I had previously drawn a 1:1 scale plan of how I wanted the tentacles to lay which was good as a guide, but a plan doesn’t show depth, which was the tricky bit. It was a case of just thinking ahead as to which tentacles would twist over others and plan on the fly as to how deep to cut away.

Once the carving was done, it was time for frosting / icing (depending on where you live). In Australia, it’s called icing so I will roll with that. I made some butter icing and applied a thin layer over all the body except the tentacles. I then colored up and rolled some fondant. I’m actually impressed with myself as I’m quite critical of my own work and this time I was determined to make the fondant thinner – so I got it down to about 2-3mm thick. I don’t know what the standard is but, it looked really thin. So that went over the head and body only to start with.

Just prior to adding the fondant skin, I rolled fondant eyes which were recessed into the cake eye sockets. After a bit of molding it was time to do the tentacles. I did each tentacle individually, first covering one with thin butter icing, then thin rolled fondant. I started with the tentacles that were on the bottom layer (so front ones) and worked my way back, applying butter icing then fondant one tentacle at a time. I just use a scalpel to cut fondant as I’m applying the thin sheets.

Once I had finished off the fondant – tucking, joining and blending into the body, it was time for some colour. My cake supply lady said to dilute the colouring with vodka (look out kids!)… anyway, I used the vodka, it’s only a very small amount over the whole cake. The colour was just applied with a brush, just like painting onto a canvas and painted the octopus as you see it – nothing technical there. Although, I did roll out a piece of fondant and used that as a test sheet before applying the colour onto the cake.

I then knocked up another batch of butter icing and scraped and piped that to make the little reef island that the octopus sits on. To finish off, I just used small white chocolate pastelles, choc drops, choc chips, duds – whatever you want to call them, to press into the fondant to use as the suckers on the tentacles.

Job done by 12 midnight this time. Better than the 3am finish on my youngest son’s “Pixar Up house cake” for his first birthday (the cake prior to this one)… that was epic… might post that one up some other time. 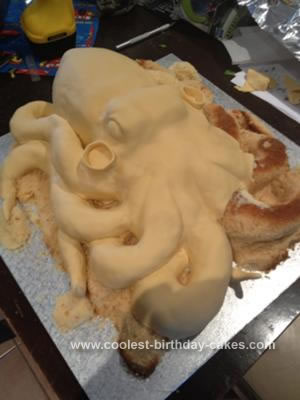 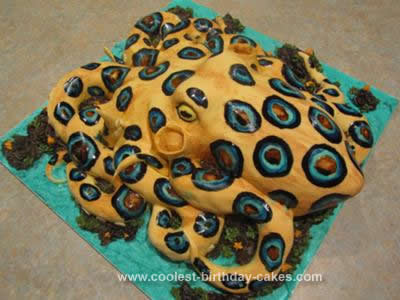 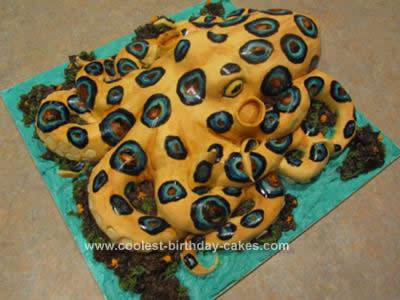