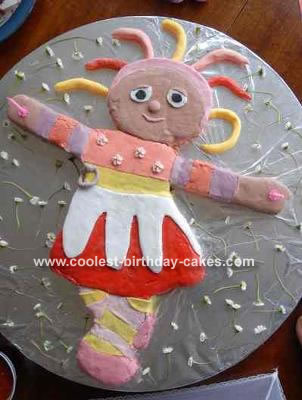 In the Night Garden is an extremely popular TV program the UK for very young kids. My daughter loves one of the main characters, Upsy Daisy, so I decided to make her an Upsy Daisy cake for her second birthday.

I downloaded an image of Upsy Daisy from the BBC website and then enlarged it on the photocopier so that it was nice and big. Then I cut out the picture and cut them into parts:

I threw away the hair part of the picture.

I checked to see what I could bake it in and found that I had 2 large flat Pyrex dishes that the pieces of paper could be laid on nicely.

I used 2 packets of cake mix and cooked them in the Pyrex dishes. I made sure that both dishes were filled to the same level and this ensured that my cake was all the same height.

Once the cake was cool, I placed the templates over them and used a sharp knife to cut out the pieces.

I covered my large Lazy Susan with kitchen foil and placed the cake on top to make the Upsy Daisy.

I used ready to roll fondant icing. (Rolled it out using cornflour and icing sugar.)

Firstly I made her red dress and then laid white on top. I used coloured icing for the red and black. I used food colouring to mix the pinks and purples with white icing. For her skin I added some cocoa powder to pink icing and it worked well.

I rolled out icing into sausage shapes to make her hair.

For a finishing touch I put little daisies round the cake.

My little girl loved her cake. I am so pleased with the way it turned out as I’ve never used this icing before and am quite a cake making novice.

Coolest In The Night Garden Upsy Daisy no 1 Birthday Cake

16 thoughts on “In the Night Garden Cake”