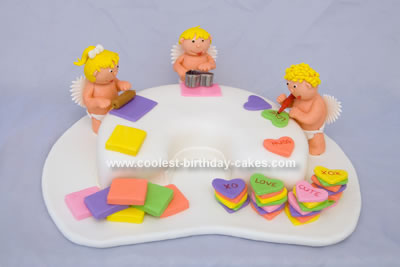 I got the idea for this Homemade Valentine Assembly Line Cake straight from Wilton’s 2006 Yearbook. I couldn’t find a horseshoe pan in any of the stores nearest to me, so instead I just used a 10″ round cake pan and poured my cake batter around an open coffee can placed in the middle for the opening. Then I just trimmed about a third of the cake off to get the horseshoe shape.

I used Wilton’s copper coloring for the bodies and just shaped the heads, arms and legs. Then attached them all with uncooked spaghetti noodles and some marshmallow fondant thinned with water. The curly hair was my favorite. That was strips of fondant wrapped around a spaghetti noodle. I used a sharp pair of craft scissors to get the feathers on the wings which were cut out of fondant with a heart shaped cookie cutter and then cut into two.

All the small features, hair, noses, eyes, ears, diapers, wings were attached with fondant thinned down with water and a paintbrush. The hearts were out of fondant. The rolling pin was also fondant with a spaghetti noodle threaded through the middle. The base is just cardboard wrapped in white fondant a day ahead of time. I had never heard of doing this before either, but it worked wonderfully.

I used a red edible marker to write the sayings on the hearts, but had to steal a smaller marker from my daughter for the actual cake. The edible one was too large. I’m also really glad that I baked the cake before I made the angels, so that I could keep checking my angel size to make sure that when they stood next to the cake, that their arms would be just the right height. The actual cake is iced with buttercream and covered in white fondant also.