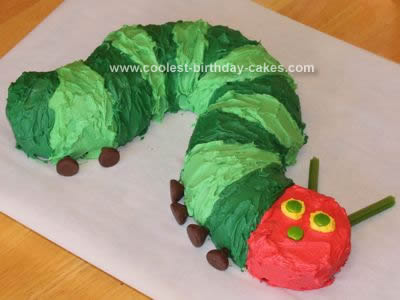 I used a yellow layer cake recipe and increased it by 50% to made one Bundt cake and one 9×5 loaf cake. I cut the Bundt cake in half, then cut one half in half again; I arranged these to make the body. I cut a circle out of the loaf cake for the head and flattened it a bit on the side where it joins the body. In retrospect, I should have cut a little bit of the loaf cake for the tail, but instead I just carved off the end of the Bundt cake a little bit to shape the tail.

I used a buttercream frosting recipe and increased it by 50% as well, so I would have plenty to work with (I ended up with plenty left over; a single recipe would probably have been enough but it would have been too tight for my comfort). Using basic food coloring from the baking aisle, I scooped out a tiny bit of frosting and dyed it yellow, then scooped out enough to cover the head and dyed it red, then dyed the rest dark green and light green. The frosting job is pretty self-explanatory. One tip: instead of trying to make a thin line of yellow frosting around the eyes, I just put a little ball of yellow frosting down and carefully pressed the green candy down on top of it. I raided my older daughter’s candy jar and found some green Spree for the eyes and nose. Hershey’s kisses made great feet. The antennae were some kind of fruit-twist type candy.

It’s not shown in the picture, but later I put four strawberry halves down on the cake board next to the caterpillar. It was a hit!