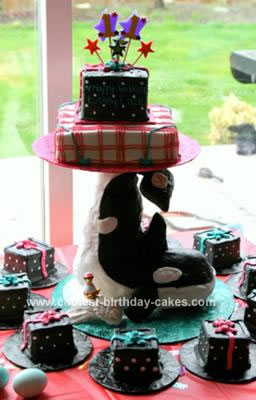 My daughter is crazy about Webkinz, and so it was fitting to have her entire birthday around this theme (she was hoping for a ton of them as presents too!). She was very set on having a whale, that was holding a cake. This Webkinz Whale Cake took me about 2 weeks to prepare for, the whale being the most time consuming.

I have a cake pedestal that is heavy acrylic that was used for the core structure of the whale, I then made up 2 or 3 batches of rice cereal treats to make the form of the whale. I stacked them in a basic shape, and formed them around the pedestal, then carved it with a knife to get it to look like I wanted. I iced it in royal icing and smoothed with my hands as much as I could.

I then used fondant in black and white to go over it and make it look like something actually! The tail of the whale was made up and pressed into place to get it at the angle I wanted, but left to dry separately, until the other portion of the whale was completely dry (about a week). I then flipped the entire thing over and attached the tail to the top pedestal plate with more royal icing and let that dry about 2 days.

The cakes themselves were a mix of white and chocolate cake, iced to look like presents. I realized pretty quickly that black was not a great choice in color, as all the girls teeth turned black!(and lips and chins etc.!).

It was a lot of fun and she was very happy that her idea could come to life!