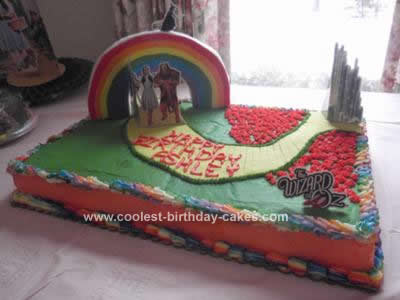 This Homemade Wizard of Oz Cake was for my daughter’s 6th birthday. She was really into The Wizard of Oz, and she wanted a theme cake.

I started off by baking two 9×13 cakes (one confetti, and one strawberry). I filled both bakes with vanilla buttercream and placed them side by side on a cake board. I then crumb-coated and frosted, with grass green buttercream to make one 18×13 cake.

I created a 3-D rainbow out of rice krispy treats and covered it with fondant in the colors of the rainbow, making the top and underneath white. I put dowels in the two ends of the rainbow so that I could stand it up on the cake when finished. The yellow brick road was made out of yellow colored fondant that I rolled out, cut to the shape that I wanted, and scored to replicate the bricks. This was then laid across the cake as seen in the pictures.

For the “field of poppies” at Emerald City, I used a star tip and placed them in clusters. The top and bottom borders were made using an old technique that my mother showed me when she made cakes. I took a pastry bag and used a toothpick to “paint” stripes of rainbow colors on the inside of the bag using food coloring; then filled the bag with white buttercream. I then piped a shell pattern rotating the pastry bag slightly on each shell. This created the rainbow effect seen.

Once the decorating was finished, I placed the rainbow onto the cake at the begining of the bricks, and added cut-outs of the main characters coming through the rainbow. A cut-out of Emerald City was place at the end of the road, and the witch was put on top of the rainbow.

My daughter and her friends loved the cake. 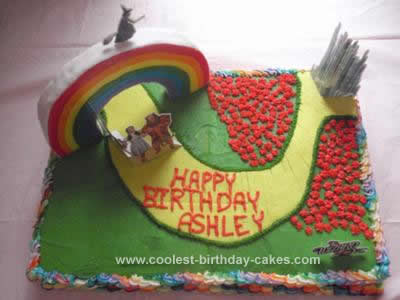 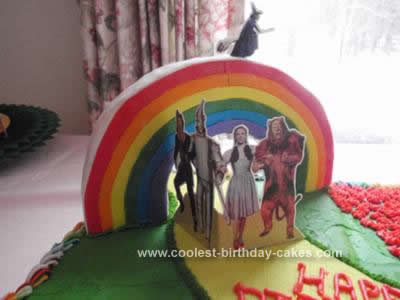 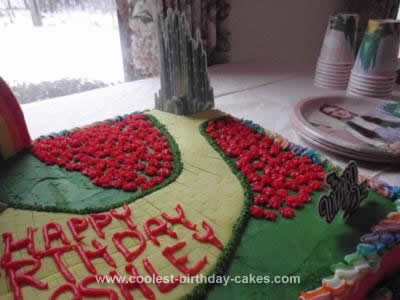