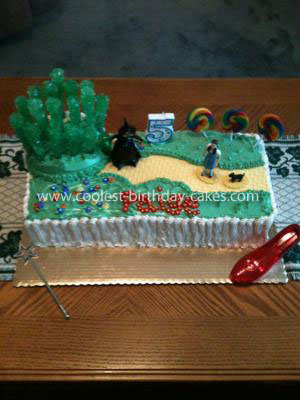 This Wizard of Oz Birthday Cake was made entirely with buttercream icing and candy. It was filled with a whipped chocolate genache and was made with both butter yellow and devil’s food cakes (made side-by-side so people could choose their cake flavor).

First, I did a crumb coat. Then, I made the yellow brick road using yellow “white” chocolate. I added a little vegetable oil to the chocolate to make it less likely to crack when molded. Then, I poured it over a brick mold for fondant. It chilled in the fridge for about 20 min., then I peeled away the mold. The chocolate road was placed on top of the cake and I iced around it with green frosting.

Then, I made poppies (and spelled her name in them) by piping colored buttercream frosting and giving them non-parel candy centers.

Finally, the Emerald City was made using 1/2 of the Wilton ball mold. I used it as an arch to stick rock candy in after icing. My only change for the future would be to switch to candy sticks. While the rock candy had a great look to it, I wasn’t crazy about the gaps in between each pillar.

I finished up the cake by adding lollipops I ordered online through BirthdayExpress.com. It was fairly simple and a huge hit! 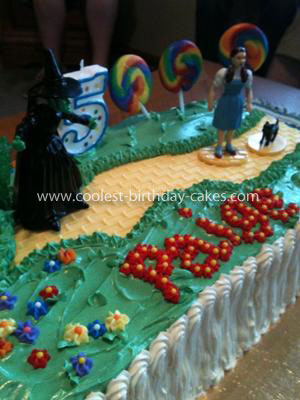 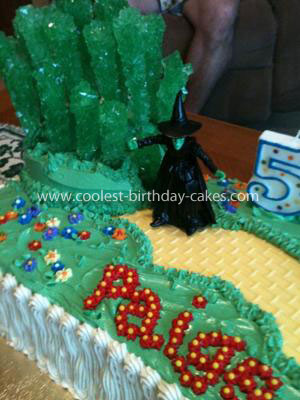