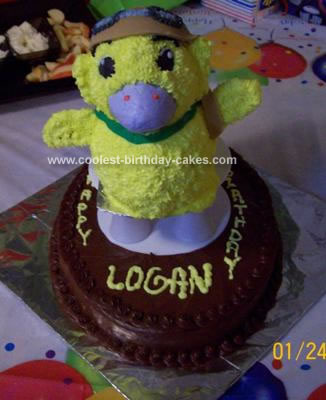 My grandson loves Wonder Pets and I wanted to make some type of Ming Ming cake for his 1st birthday. There weren’t many choices of a Wonder Pets cake so I came up with my own version.

I used the 3D duck pan, carboard for the arms and fondant for his cape and hat.

I used buttercream icing and colored according to a picture I found of Ming Ming online. I made a pattern for the Wonder Pets logo for the cape from a website I found online. I just printed off the picture and used it as a guide when I cut the fondant.

The hardest part I found was making his hat. When it was all done I realized I didn’t shape it exactly right but I usually learn from lots of mistakes from the first time cakes. I used skewers to hold the cardboard arms in place as they get heavy after being covered with icing.

I made a chocolate layer cake as the base and used dowel rods for as this cake is rather heavy. I smoothed the icing for his beak and filled in the black for his eyes before I covered the body. I used a star tip, #16 maybe to cover in yellow and to decorate his hat.

All in all it was a fun cake to make and I hope it helps others with some fun Ming Ming ideas! 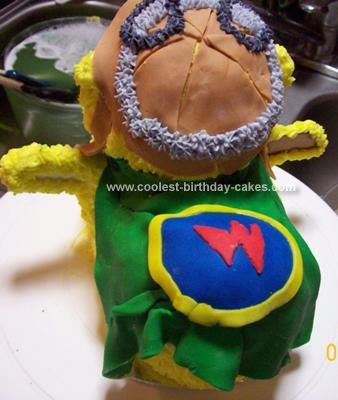