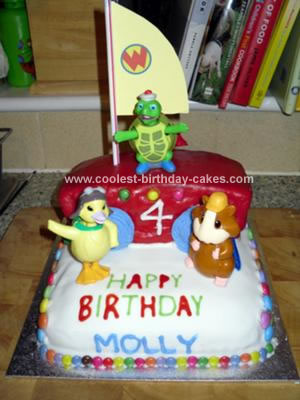 I made this Wonder Pets Flyboat Birthday Cake for my daughter’s 4th Birthday. Having only ever made a 2D Peppa Pig birthday cake last year, imagine my horror when she announced she wanted a 3D flyboat cake this year!

The base cake is a sponge cake my husband made, the first sponge I attempted was about half an inch thick and was cut up to use as layers for the flyboat itself. I iced the base cake with ready to roll white icing. The writing is ‘Asda’ own icing tubes, but they were very runny and the writing started to run down the cake! The smarties on the side were more out of necessity rather than a desire to decorate, as I hadn’t rolled the icing out quite big enough, so they cleverly hid the patch job!

The flyboat is a combination of the 1st attempt of the base and a loaf tin shaped sponge cake. I layered them with jam inbetween the layers. I iced this by making up fondant icing into a ball and adding some red food dye.

I didn’t have tooth picks big enough to secure the flyboat to the base, so I had to break down some wooden kebab skewers instead. The wheels are Oreo biscuits covered in blue piped icing, and the flag is a straw with yellow card that hubby printed the Wonder Pets logo onto. The lights are smarties and the engines are piped icing.

The characters are toys we’d already bought our daughter, as a gift, so we opened them early and popped them on the top.