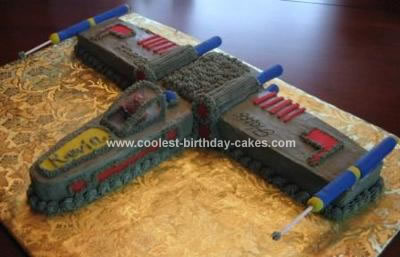 Using a template (made from a brown grocery bag) I had prepared in advance by looking at the X-Wing Fighter and taping together the parts until they “seemed right”, I cut the fuselage and wings, leaving a little cake to spare.

Thinned icing was used to provide a base coat. When it hardened, I went over the cake with about 1/8″ thick icing all over. For the lasers, I used fancy stick wafers (some were cut down) and covered them in fondant (you can buy fondant pre-made at the store) and in some places, icing. I stuck lollipop sticks in the ends of the laser guns and put an icing star on each.

Fondant was used throughout the cake for striping and even R2D2, although you can use a Lego R2D2, too. I bought a Luke Skywalker (in pilot gear) and cut his legs off so I could stick his trunk into the cake. I used the shrink wrap packaging for his windshield and decorated the seams with starred icing. The engines were small cookies that I cut down even smaller and covered in icing and fondant.

I really enjoyed making this cake and my son was very surprised!