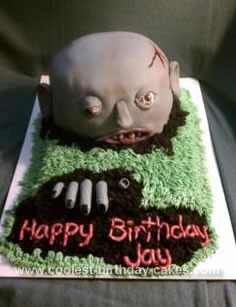 I made this Zombie birthday cake for my son’s friend’s birthday. For the head, I baked 6 8-in round cakes, all chocolate. After doming and stacking them, I froze them overnight to make sculpting a little easier. I rounded the top and cut out spots for the eyes and mouth. I then tinted some homemade fondant with Wilton Moss Green and a little brown.

I shaped the fingers, ears and nose from the colored fondant and set them to the side. I iced and covered the head, pressing the fondant into the areas for the eyes and mouth, and then attached the ears and nose. The eyeballs were white fondant, and I painted the irises, pupils and veins with icing dye. I then took some of the leftover fondant I used for the skin to make the upper and lower lids for the eyes.

For the mouth, I painted the inside black with icing dye. I tinted some fondant with Wilton Burgundy and No Taste Red for the tongue and lips and used a straight edge tool to make the lines on the lips. The teeth are white fondant that I brushed with some brown color dust. To attach them, I just put a tiny dab of water on the end of each tooth. I lightly used the brown color dust on the head as well. I used a sharp knife to make the cut on the top of the head and used Wilton No Taste Red to make the blood. I put a few more small cuts here and there.

For the ground, I baked an 11×15 chocolate cake. I used some of the domes from the round cakes to make the dirt. The grass is white icing tinted with Wilton Leaf Green and is piped with tip #233. I piped the lettering with red icing using tip #6. Finally, I painted the fingernails black and used a straight edged tool to make the creases in the fingers and placed them in the “dirt.”

The cake was a real hit!