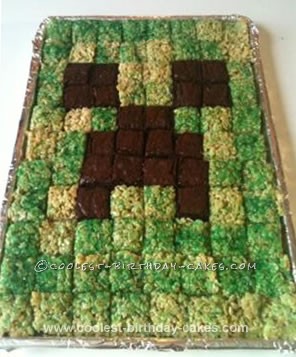 My son is turning 10. I hardly know how tall he is because 90% of the time, he sits at his computer playing Minecraft. When he stood up the last time, I discovered he looked a lot more like a teenager than a little kid. So I panicked because his first double-digit birthday was almost here, and I didn’t want the cake to make him feel like a baby.

So, I asked him what theme he wanted for his party. “Minecraft,” he replied. I looked it up online. The pixilated game has no spinoff toys (well, okay, it does have a foam pickaxe); no online birthday discount shops have picked it up and made paper napkins for it… so what to do? The only image that seemed consistent was the “creeper” that is different shades of green, all boxes, with a very specific square face. Other people had made spectacular cubes from fondant, remarkable recepes with knockout Steves that looked real. Pickaxes that probably were actually made of diamond.

I was broke and terrified. Tweens judge as harshly as teens and there was one more aspect to this whole cake-baking thing that I haven’t told you yet.

I can’t bake. When I follow recipes perfectly, I burn things. When I do not follow recipes, my kid names my creations things like “Hobo’s Dismay.” I never thought in a million years I would ever submit a recipe to a cooking site, much less a coolest-cake site.

The cooking sites on the internet all make me feel like a bad mom. Not only are these women great cooks, but they have time to document their creations and write hilarious and charming blurbs about how they made the triple-layer-Redstone feast of frosting….

So I thought – what can I actually make that my kid and his tween friends will actually eat?

And I came up with this easy-peasy creeper cake. If I can make it, anyone can.

Brownies make up the face and the rest of the surface is all rice-krispy treats to which I added various amounts of green sugar (left over from failed Xmas cookies). Result? It looks awesomely like a creeper!!

And what a success.  Son’s jaw dropped. His friends applauded (!!) and they had fun “stabbing” the creeper with birthday candles and then pretending it was going to explode.  At the end of the party, one of the boys told me it was the best birthday cake he’d ever seen.  I think I went up a level.

(PS: creepers are supposed to hiss before they explode: the cake I made does not explode or hiss, but it would be hilarious if you could put a recording of the hiss somewhere near the cake…make those boys duck for cover!!)