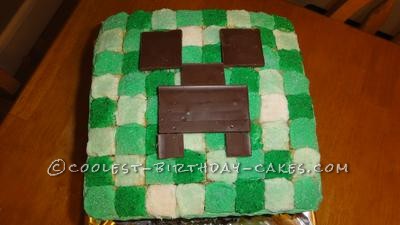 I decided to surprise my 8-year-old son with a cake based on Minecraft, a popular online multiplayer computer game. After consulting with his two older brothers about which scene or character would be best, we decided to go with a Creeper. Minecraft is all about world-building with blocks, so everything is made of squares. Creeper is a 3-D character in the game with a multi-color green block head and face that is immediately recognizable.

For the cake I used two cake mixes made according to directions and baked in 8×8 square pans so I would ultimately have a cake 4 layers high to serve 16. You could easily do a 2 or 3 layer cake. I shaved the tops from the layers so they would lay flat. I thought about making a checkerboard cake so it would have squares of vanilla and chocolate cake inside, but making one in a square pan involves more sculpting than I wanted to attempt, so I alternated chocolate and vanilla layers, filling between with a thin layer of green frosting. I then frosted the outside and top with green, using most of two cans tinted green frosting.

I contemplated many different ways to do the squares on top, and finally found some small wafer cookies (Voortmans vanilla mini-wafers) that cut neatly in half  into squares (other possibilities were graham cracker squares or Life cereal). I spread a thin layer of frosting onto each cookie square and dipped them into three shades of tinted green granulated sugar, then pressed them onto the cake in neat rows and a slightly random pattern, inserting in a white one here and there. Since the cookies are thick and had a white and brown edge, I piped a thick line of green frosting on the outside edge of the cookie mosaic top.

I broke up full-size Hershey chocolate bars and, using frosting as glue, affixed them to the top to form the face. I wrote on the front of the cake in dark grey frosting, trying to mimic Minecraft’s boxy font, but the frosting was getting warm and drooped on the vertical surface…and I’m still not sure where I will put the candles since they won’t stick into the cookie top. But I’ll figure it out, and I can’t wait to see his face when he sees the cake! 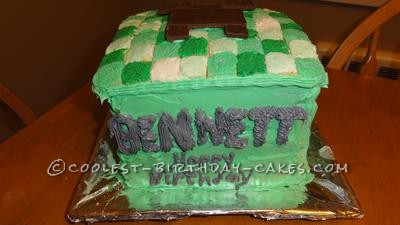