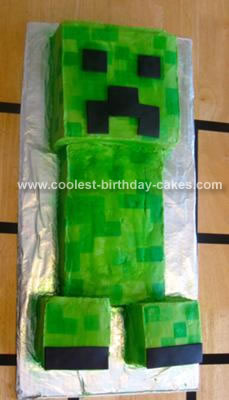 My daughter is a huge fan of the computer game called Minecraft, so for her ninth birthday we threw her a Minecraft themed party. Even though in the game Minecraft, you can actually make a cake that is brown and has white frosting on top with red dots, what she wanted was a Creeper Cake. A Creeper is one of the monsters that you battle in-game, so after much planning and research I made a Homemade Minecraft Creeper Cake. It took three 9×13 cakes, and two batches of buttercream frosting to do the job but I did it!

After baking the cakes, I cut the tops off and the edges as well so that everything lines up as square as possible. I used a can of spray-on green food coloring and a block pattern stencil (I got the idea from some cupcakes I had seen online) to make the subtle block pattern on the frosting, and a little bit of store bought fondant dyed black for the face and toes, rolled out and then cut using a pizza cutter and a ruler. 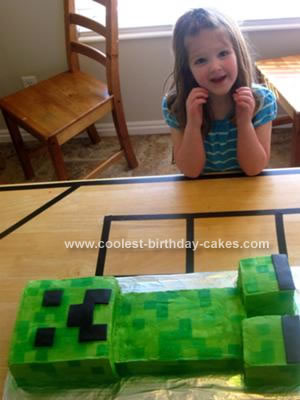