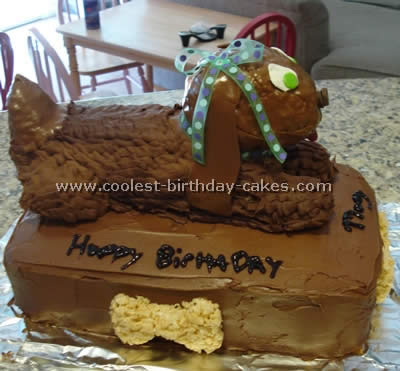 I looked at another dog cake on this website and didn’t have all the resources to copy them so I had to come up with some other ideas. Thanks to the Food Network and brainstorming I had my dog out of Rice Crispies and sat her on top of a double layer rainbow cake covered in chocolate frosting. After making the rice mixture before it had any time to cool I placed it in different sized bowls. When they cooled I removed them and shaped them into various shapes (like the head, feet etc.). I used toothpicks to attach everything accept the tail. I shaped if out of the end and added more rice to the back of it.

My daughter’s second birthday was a huge success thanks to all my hard work of course. I’m glad I was able to make something special for her special day! I had no idea making a dog cake like this could be so easy.

My nephew had a Doggie theme party for his third birthday. So my sister asked me to make a dog cake, just a plain sheet cake with a dog image on it. But of course that wasn’t enough of a challenge for me! Basically I made three cakes, a loaf cake for the main body section and two sheet cakes that I froze (makes it so much easier to cut and manipulate) to cut out the legs and head and tail.

The head was difficult but made of multiple layers using the frosting to stick pieces together. Ears wear a small piece sliced in half. A Hershey kiss was the nose and M&M’s eyes. The frosting was whipped white frosting with just a little milk chocolate to make it light brown. I made the cakes the night before and took over three hours to put together. I have to admit it was hard to see all the kids slice it up and eat it but the look on Shea’s face when he saw it made it all worth it!

This cake was for my eight year old granddaughter. They had just got a new puppy that she really was excited about and she loves to play soccer. So couldn’t think of a better way to surprise her than to make her a dog cake and a soccer ball.

I came up with the idea to use two 8″ layers, cut and iced and two 6″ layers cut and iced. This gives more height to your cake. With a small cake board under the 6″ cake and dowel rods inserted, we offset the smaller cake almost to the edge. Then we started at the backbone and just started cutting away. I had also baked off an extra 8″ round, two small doll pan cakes and a round ball pan cake (for the soccer ball).

We cut one of the doll cakes in half to make the hind haunches. We cut a crescent moon shape from the 8″ round for the tail. We used a second doll cake to make the front and back paws by cutting it in half and carving it down. For the right front leg we used a 2″ slice of cake and attached it for his front leg. We also carved out some of the cake in the front of the body to form his chest and fit the soccer ball then we attached a paw on top. So he really didn’t have a second front leg but with the ball in place you can’t tell that.

I started with a lamb cake pan (see attached picture) and made the cake with the following recipe: 2 cups sifted flour, 2 1/2 tsp baking powder, 1/2 tsp salt, 1/2 cup butter or margarine, 1 cup sugar, 1 tsp vanilla, 2 eggs and 3/4 cup milk. Pour into the face half of a greased and floured lamb mold. Cover with other half. Place on cookie sheet. Bake in moderate 375 oven for 40-45 min. or until cake tester comes out clean. Allow to cool 10 min. Remove from mold and cool.

It is easier to frost the dog cake when frozen. I froze my cake and then iced it with Wilton’s Butter cream icing. I cut the ears off the lamb and used marshmallows as ear forms. I cut them in a shape of a triangle and placed them on the top of the lamb. The used a whole marshmallow to give a little more height for the tale. I then used the Wilton tip #10 and made the fur with white icing. I used black icing for the nose and eyes. I used a pink M&M for the mouth. Then I finished the puppy off with a collar made out of Easter M&Ms.

In honor of our new dog JJ, my 10 year old son wanted a “puppy” themed birthday party. My inspiration came from a common Easter bunny cake (ears, round face and bowtie) recipe using two round cake pans to make this dog cake. One round is the face. The other round is cut to form two bunny ears with the bowtie in the middle.

The bowtie is cut for the muzzle and two small triangular pieces to fill in at the ear tops. For puppy ears: Slide down bunny ears and round the bottoms. Slice a little off the ears’ inside to set closer to the round head. Close the ear top gap by cutting two small triangular pieces from the bowtie and set in. For the muzzle: Cut an oval from the center of the bowtie. Slice it horizontally in half and place on top. Frost the entire cake white. Come back in and blend with a little white/brown frosting. Two Jr. Mints for eyes and upside down (and cut) Hershey kisses for the nose and mouth.

The kids just loved this dog cake at the party!

Our daughter loves puppies so we naturally decided to make a puppy dog cake for her first birthday. We got the idea for the cake from a Woman’s World magazine where they used Twinkies and a muffin for the shape. Since my daughter has not had a lot of sugar or preservatives the cake was banana-apple which she loved in her “taste tests” (I had to make sure that she liked her birthday cake before her actual birthday).

To build the dog I made two rectangular cakes for the body, paws, haunches and ears and made another cake baked in a small round bowl for the head. I sculpted the head a little bit to make it look like a dog. Most of the cake is glued together with the buttercream frosting and a few toothpicks but we decided that the head needed more support – wouldn’t that be the worst thing to be carrying the cake singing “Happy Birthday” and the head falls off!! So we cut a chopstick in half and used that to connect it to the “body”.

I’ve never “piped” icing and we were running short on time so I spread the icing on the dog, held the flat end of a knife against the icing and pulled it away to make it look like fur. It went a lot quicker than piping (and a lot easier on the hands). The tail is a wunderbar chocolate bar cut in half lengthwise and pasted together with buttercream icing. The tongue is a “sour candy soother” and chocolate almonds / raisins worked for the eyes and nose. This dog cake was a hit with everyone especially the birthday girl.

This is a dachshund dog cake I made for my nephew. He has a dachshund and wanted a cake that looked like “Wilson.” I just cut out the shape of a dachshund using a sketch I had on hand as a guide. I then iced the entire cake with buttercream tinted brown. Next I added a small piece of cake for the nose.

I then covered the entire cake with brown fondant and made the details with fondant (i.e. the nose, eyes, tail) using the blunt end of a skewer I was able to add more details on his face and body (i.e. the ribs and indentations around his legs). I really enjoyed making this cake and my nephew loved it!