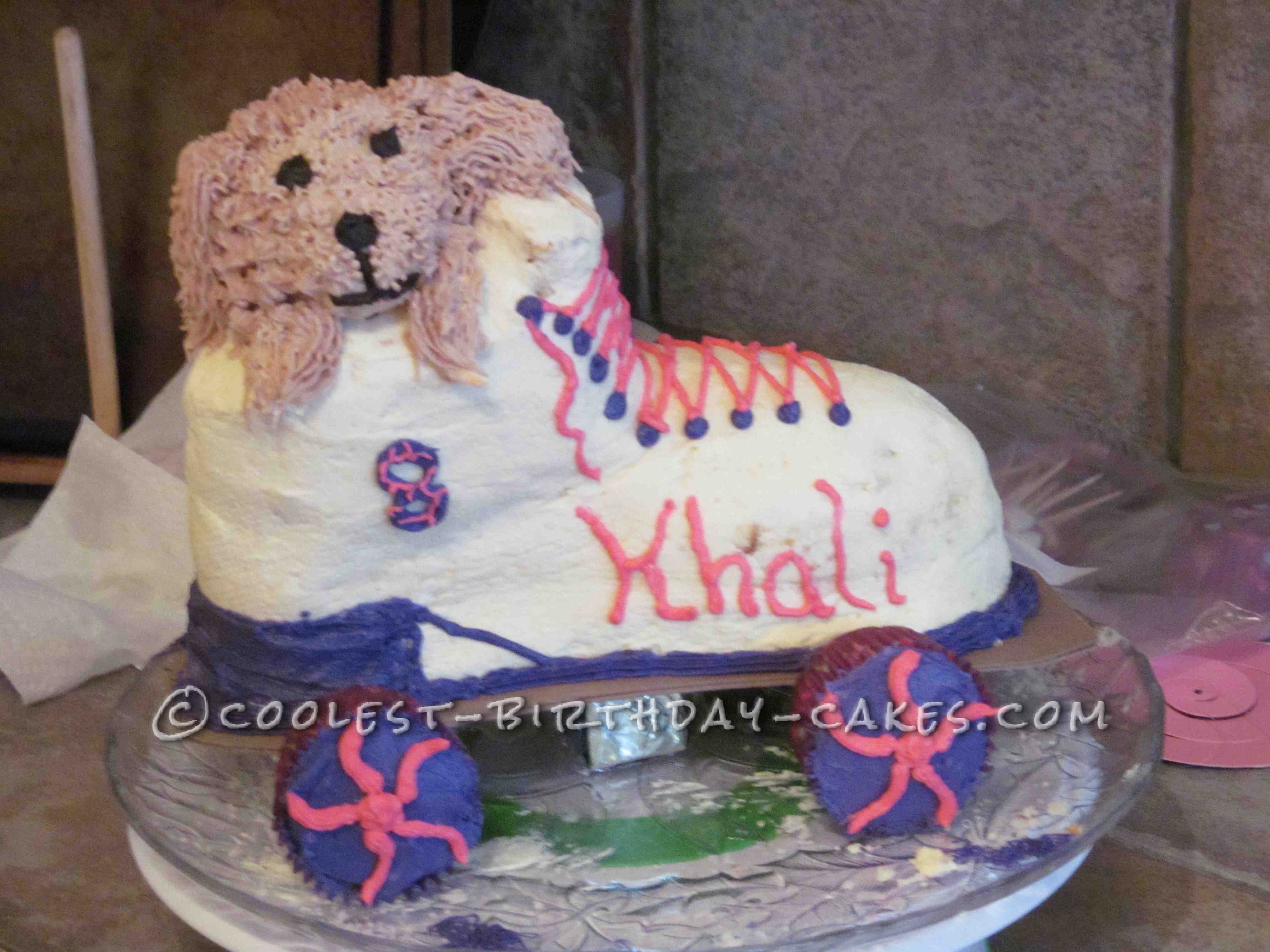 I came up with this Puppy Roller Skate Cake after a friend’s daughter decided to have a Skate Party with a Diva Puppy theme. I was reasonably certain I could make a roller skate cake, but wasn’t sure about a free form puppy.

I started with a 9×13 cake. I found a boot print online and printed it out to shape a piece of cardboard the cake sat on. I also used the print to mold two layers of cake before placing them on the cardboard. I iced the cardboard, placed one shoe shaped layer, iced that layer and placed the second layer. After the initial two layers, I placed extra cake pieces up on the top for the the top of the skate. I took a knife and slowly carved at the edges of the skate from top until bottom, molding it into a skate. I placed dowel rods in the tallest section of the skate for stability (we had a leaning tower of skate at one frightening moment).

After I was happy with the shape, I iced the entire skate in white butter cream icing. I let it sit 10 or 15 minutes. Then I took a paper towel and layed it on the skate while gently smoothing the icing (a technique I learned for smoothing icing for cakes). Gently move your fingers on top of the paper towel and move the paper towel as necessary until all the icing is smooth and you have no holes (if the icing starts to stick to the paper towel, you may be pressing too hard or not waited long enough).

Now I had a white boot and needed details. I pulled up a picture of roller skates to get my piping ideas from. I slowly piped on the heal, shoe strings, age and name. I let my cake sit overnight and transport before completing the final part (the puppy and wheels).

Before adding the puppy, we moved the cake onto it’s platform. I had another piece of cardboard that was close in dimensions to the skate. We place it on top of building blocks wrapped in foil. I used 5 blocks in all. Two sets of two where the wheels would rest and one placed in the center for a brace. We lifted the cake up onto the platform and then placed a large dot of icing on the tray and cardboard platform to secure the cupcake wheels. I made an additional cake mix to get the four wheels I needed for the cake. We wanted pink and purple accents to match the party items, so I used purple paper cups and matched the icing color to the paper for the wheels.

To make the puppy, I mixed the remaining cake and some butter cream icing in a bowl. It is a soft substance one could easily mold like playdough. I made a basic face for the puppy. I place it on top of one of the dowel rods poking out of the top of the skate. Then I piped a thick layer of icing for the ears and paws. After that I went in for the details.  I used fudge frosting for the nose, eyes and mouth. Then I used the grass detail tip to slowly dot or drag out fur (dependent on the length I wanted). While I was doing this last part, the birthday girl brought all her guests by for a tour of her birthday cake.  Then I added a mini tiara comb to the puppy to finish the “diva” part of the theme. 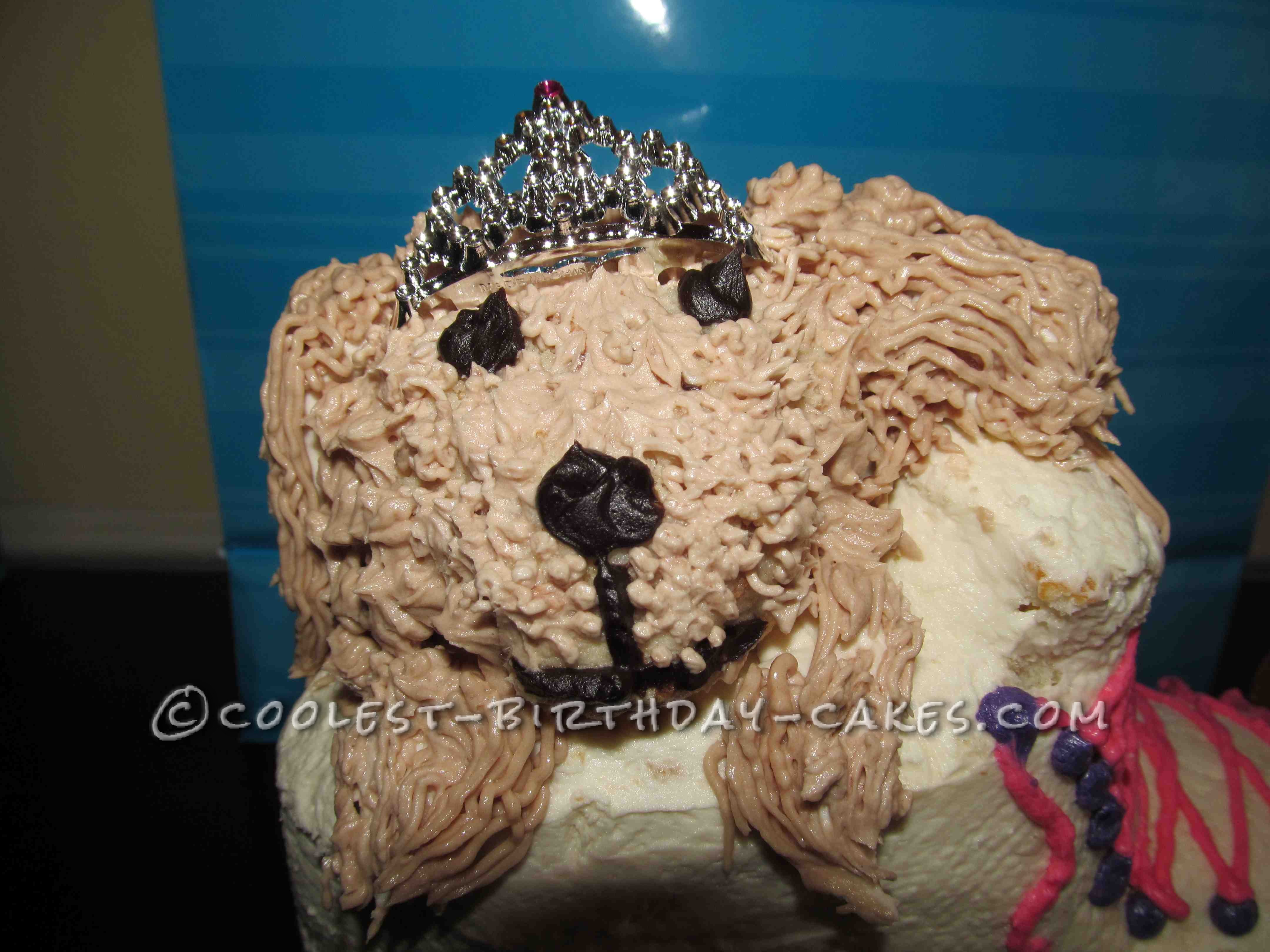