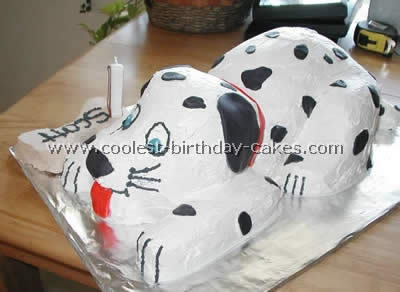 I browsed the Web and found some really cool dog birthday cake recipe ideas. This dog is about 20 inches long, 12 inches wide and about 9 inches tall. It was for my son’s first birthday and we had a Dalmatian that he loved. I stacked three sheet cakes and carved the basic shape, carved the tail and front legs later and attached with frosting. (An after thought was that I could have used Twinkies).

The cake is frosted in Pastry Pride icing, detailed with black, red and blue fondant. I then carved the small bone cake for his individual cake which was a huge hit!!

I found another dog birthday cake recipe on this site so got some ideas. This was really easy and took only about four hours.

We decided to do a Puppy Party for my two-year old daughter’s birthday and needed a puppy cake. I looked online for dog cake ideas, but didn’t find exactly what I was looking for so created my own. It’s really pretty simple.

I used two 9-inch round cakes, an 8×8 cake and 6 Twinkies. The first round cake is the head the second the body. Using the 8×8 cake (you could also use 9×13 but will have some excess) cut out two paws, two feet and a tail. I made a pattern using paper first to ensure that I had enough cake.

Then use two Twinkies for each ear cutting it a little to fit along the round edge of the head. Use two Twinkies (cut off a 1/4 to a 1/3 of each) to make the snout. Put pieces together, frost and then decorate. I just used white frosting for the main color, chocolate for the spots with some black food dye in the chocolate for the eyes and paw prints.

I piped along all of the edges with regular skinny tip or star tip for the body. I used strawberry pull-and-peel Twizzlers for the tongue and collar. The kids at my daughter’s party loved this cake! It might take some time but it’s really a pretty easy cake to make.

My daughter wanted an Oddball cake (From Disney 102 Dalmatians). I found a 101 Dalmatian pan on eBay and used her stuffed animal to design it.

I like to make the tinted icing the night before I make the dog birthday cake recipe and refrigerate it so it takes less time the next day. I prefer the homemade icing with butter for better flavor.

This dog birthday cake recipe is great for a Puppy Party OR Firefighter Theme!

For my son’s 1st birthday we hosted a Puppy Party and made a dalmatian cake. It is so simple but oh, so cute!

1. Cook two 9″ round cakes and as many additional cupcakes as you need., 2. Cool. Stack the two cakes on your serving platter. (We used a round, red plastic tray we found at a dollar store.), 3. Add two cupcakes at the bottom of the cakes to create “puppy paws.”, 4. Ice both cakes and all cupcakes white., 5. Decorate the dog birthday cake!, EYES = Necco Wafers and M&Ms, EARS & JOWLS = Black string licorice, NOSE & SPOTS = Brown M&Ms, COLLAR & TONGUE = Red “Fruit by the Foot”, DOG TAG = Necco wafer, 6. Decorate cupcakes! Place three brown M&Ms on each cupcake to create a puppy paw!

This is such a great dog birthday cake and a super “beginner’s” decorating idea.

I used this dog birthday cake recipe for my daughter Georgia’s first birthday party!! She wanted a cake to look like our Dalmatian Dixie. It is actually a 3-tiered cake. The bottom base is double layer chocolate cake that I made in large round pans. I covered it with white butter cream icing and cut out circles out of black-tinted fondant icing to look like paw prints. I also made red streamers for the bottom border by cutting red fondant into thin strips and curling them around a dowel rod and letting them dry into curly shapes.

The second tier looks like a red dog bowl. It is actually a double layer white chocolate cake, covered in red fondant icing, and filled with “Cocoa Puffs” cereal to resemble dog kibble! The top of the cake is the Dalmatian….a pound cake baked in a 3-D Winnie the Pooh cake pan. I cut off the ears on the cake and used butter cream icing to “sculpt” the Dalmatian. The ears and spots are black fondant icing.

We celebrated Georgia ‘s birthday on the 4th of July, so we bought a couple of “Sparklers” at the Fireworks shack and turned off the lights….we stuck the sparklers in the cake and it was quite the show when we brought in the cake!! Lots of “Ooohs” and “Aaaahhhs”!!

Every one year old needs a “Smash Me” cake…So we took the Dalmatian off the cake and gave it to Georgia in her high chair to smash! The rest of the party guests enjoyed either the chocolate or white chocolate cakes.

I began decorating cakes as a hobby two years ago. I took a basic course, but then began buying books and doing the techniques on my own. When a friend requested a dog birthday cake for her boss’ daughter’s birthday I decided to make it very special. All I was told was to make a Dalmatian puppy with white cake and white icing. They thought it was going to be a “flat” cake – boy, were they surprised with this!

To make this dog birthday cake recipe, I did two layers with a 13″ x 9 7/8″ oval pan. Instead of putting frosting between the layers, I usually put pudding. In this case I put vanilla pudding. This is tasty and also makes the cake very moist. This cake was covered with white butter cream icing.

For the puppy, I used a 3D bunny pan I bought on eBay some time ago. It is a retired Wilton pan number 502-2243. I used a pound cake batter in the bunny, as these hold up better than a regular cake mix for the 3D effect. I made the bunny the night before and froze the dog birthday cake.

The next day I carved the bunny’s ears and tail off the frozen cake (freezing it makes it much easier to carve and reduces crumbs). I then placed this cake on the main cake, using a foam board base under the puppy and drinking straws inserted in the oval cake for support.

The tail of the dog birthday cake was done with icing, as were the ears, which are made from several layers of the stars that cover the rest of the cake (tip 16). The details (spots, nose, tongue, eyes, collar, and flowers) were done with colored rolled fondant.

The party hat was a sugar cone covered in rolled fondant. The spots were cut with the offside of different size icing tips and the flowers were done with gum paste flower cutters. To add a little “bling” I purchased some silver holographic luster dust at a cake supply store (non-toxic!) and applied it with a small paint brush by mixing it with a few drops of lemon extract (on collar tag and all flowers).

The only other tip I would give would be to make sure the base of your dog birthday cake is strong. This is a heavy cake! I used a double layer of foam board cut with an Exacto knife with the cake pan as a template. This cake feeds 50-55 people, and can be served by removing the puppy from the top of the base cake to make cutting easier. This cake took a good bit of time to create and execute, but the results were worth it! Everyone who saw it was amazed, especially the birthday girl, who was absolutely thrilled.